Aretha Franklin, the "Queen of Soul," was known around the world for her distinctive voice and soulful music style. Widely considered the most influential female vocalist of the 1960s,[1] she was the first woman inducted into the Rock and Roll Hall of Fame.[2][3][4]

Aretha Franklin was a Tennessean.

Aretha Louise Franklin was born to Rev. Clarence LaVaughn "C.L." (Walker) Franklin and Barbara Vernice Siggers in Memphis, Tennessee on March 25th, 1942.[1][3] She had several siblings, including Cecil, Carolyn, and Erma Franklin, who later worked with her; some from both of her parents' prior relationships.[1][4]

Aretha Franklin was a Michigander.

While Aretha was very young, her family joined the Great Migration, settling first in Buffalo, New York, then in Detroit, Michigan. She began singing in her father's New Bethel Baptist Church in Detroit, where her father's "million dollar voice" made him a celebrity preacher, attracting many famous gospel singers to his church and their home.[1] But her parents divorced when she was 6, and her mother moved to Buffalo, New York.[3] She was able to remain close to her mother via summer vacations and her mother's frequent visits, but Barbara died of a heart attack before Aretha was ten. It was at this time that Aretha learned to play piano by ear.[1]

Aretha dropped out of high school after having her first child at age 13.[4] Her next was born at age 15.[4]

The mother of four sons,[1] Aretha loved her family fiercely and insisted they brought her the most joy in her life.[3]

Aretha began her singing career in her father's Baptist church singing gospel music.[3] She was taught to play piano by ear and often accompanied herself throughout her career.[1] She recorded her first gospel album, Spirituals, at 14.[3] With her father as her manager, Aretha signed to Columbia Records in 1960.[3] After a few years, she landed at Atlantic Records and her popularity took off.[3]

In the '80s Aretha signed with Arista Records and Clive Davis.[3] Many of the singles she put out during those years that ended up on the radio were collaborations with other artists across the musical spectrum.[3] She later moved to RCA.[4] Over her lifetime she had more than 100 singles on the Billboard charts, 17 of which were top 10 pop songs and 20 which were number 1 R&B hits.[4]

Aretha was the recipient of numerous awards, including the highest US civilian honor, the Presidential Medal of Freedom, and 18 Grammy awards, as well as a Grammy Lifetime Achievement Award in 1994.[2][4] She was the first woman inducted into the Rock and Roll Hall of Fame. She was also honored as the Greatest Singer of All Time by Rolling Stone magazine.[2] She had honorary degrees from Yale, Princeton, and Harvard.[4]

Aretha was also an outspoken supporter of civil rights, touring with Martin Luther King, Jr at the age of 16.[3] She sang at his funeral in 1968.[1] Her cover of Otis Redding's "Respect" became an anthem of the civil rights and feminist movements.[3]

Is Aretha your relative? Please don't go away!

ask our community of genealogists a question.
Sponsored Search by Ancestry.com
DNA
No known carriers of Aretha's DNA have taken a DNA test. 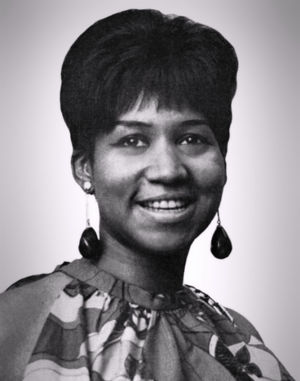 Leave a message for others who see this profile.
There are no comments yet.
Login to post a comment.
N Gauthier
Her 15yr old granddaughter auditioned for the tv show "American Idol" 2022, but was told she wasn't ready yet and to come back when she had more experience.
posted Mar 01, 2022 by N Gauthier