"Jan Fransz van Hoesen (Hoesem); was apparently in the colony as early as 1646, and in 1648 helped to erect a new barn for Jan Barentsz Wemp. By resolution of April 1, 1650, a garden was assigned to him between the first and second creeks and Jan. 18, 1652, he was given the use of the place of Willem Juriaensz, the baker, on condition that he let said Willem stay in his house 'as long as he lives, or opportunity offers'. His wife was Volkertje Juriaens."

Jan Franse (Franszen) Van Hoesen (aka van Husum) was born in about 1608 or 1609 in the town of Husum or Huesen, Nordfriesland, in what is now Schleswig-Holstein, Germany. [1][2]

He was married to Volkje Juriaens (Van Noorstrant) on May 15, 1639 [3] in Dutch Reformed Nieuwe Kerk, Amsterdam, Nord-Holland, Netherlands. By the following year they had emigrated to New Netherland, where they were early residents of Fort Orange (now Albany, New York). He was employed by the West India Company. [4][5] Reynolds states that he was an early member of the Reformed Dutch Church at Albany and Bielinski states that he was a Lutheran.

In 1662 he purchased from the Indians several hundred acres of land along the Hudson River, including what later became the site of the city of Hudson. [6][7]

At least eight children were born to the marriage of Jan Franse Van Hoesen and Volkje Juriaens. The earliest of these may have been born the Netherlands, but the rest probably were born at Albany before recordkeeping began there. The children included:[9]

He made a joint will with his wife in November 1665, when was in his sickbed. The estate described in the will included gold, silver, and jewels and land in Albany and Claverack, New Netherland, and in Husum in the Netherlands. He died in November 1665 while writing the will.[10]

The eight surviving children of Jan and Volkje are mentioned in the settlement of Jan's estate.

"Anna, wife of Luycas Gerritze, shall have in advance a bed, two pillows and a bolster, for the reason that Volkie has heretofore promised them, and then the residue of the whole estate, lands, houses, etc., real and personal property, nothing excepted, shall be distributed equally among the eight children and heirs, to wit, Juriaen; Styntie, wife of Jan Tysse; Anna, wife of Lucas Gerritse; Marya, wife of Hendk. Coenraetse; Catharina, wife of Frenck Hardingh, Johannis, Jacob and Volkert van Hoesem, on condition that Juriaen shall have the prior right and privilege to buy the farm or lands or other real estate, provided he pay his brothers and sisters what four impartial men shall judge the same to be worth." [13]

"The eldest son of Jan Fransen van Hoesen (Hoesem, Hoesum), the progenitor of the Van Heusen family, mentioned below. Genealogies of this family state that the first ancestor came from Huysen, or Huizen, on the Zuider Zee, in the Netherlands, presumably because the name of Jan Fransen is entered in the baptismal records of the Reformed Dutch Church at New York under the date of September 30, 1640, as "Van huysen." It should be noted, however, that this is a most unusual form of the name and that Jan Fransen in the early deeds and court records at Albany, between 1652 and 1672, is invariably referred to as "Van Hoesem," which would seem to be but a Dutch phonetic spelling of the name of the town of Husum, in Schleswig, from the vicinity of which a number of early settlers came. At all events, there seems to be no good reason why the perfectly familiar name of Huysen should in Dutch records be written "Hoesem," or even "Hoesum," as in the patent mentioned below, whereas the spelling "Huysen" for Husum may be accounted for by the fact that the same form occurs on the map of Denmark in Ortelius' Atlas of 1598, and probably on other Dutch maps of the period. In support of the thoery that Jan Fransen came from Schleswig it may be recalled also that Pearson in his Early Settlers of Albany, p. 126, states that the Van Hoesens were Lutherans." [14]

On 3 February 1639, a Jan Fransz, varensgezel, became poorter of Amsterdam [15] Jan Fransz van Husum in the marriage record also is mentioned as being a varensgezel.

Sponsored Search by Ancestry.com
DNA
No known carriers of Jan's DNA have taken a DNA test. 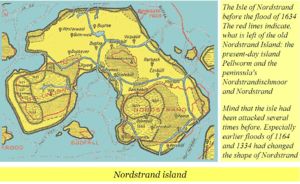 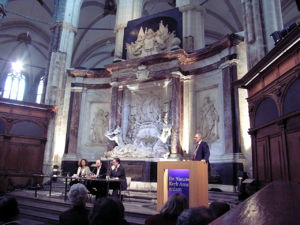 Marriage record of Jan and Volkeje 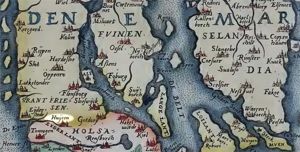 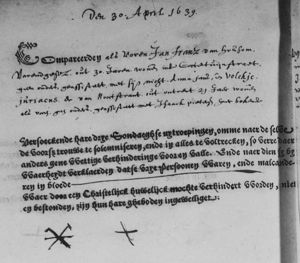 Defendant being for the third time in default, it is decided to summon her for the last time to appear on the next court day, when final judgment will be given. Meanwhile she shall be notified that if she has any proofs to submit, she must do so before the aforesaid time, on pain of arbitrary punishment. May 14, 1652. From (https://www.newnetherlandinstitute.org/files/5414/0284/1848/Fort_Orange_Court_Minutes_1652-1660.pdf)

Bea (Timmerman) Wijma
I think his LNAB probably needs to be corrected before the merge to the patronymic Franz, Fransz or Franss as mentioned in the marriage record ? (see images)

According the Bio Hoesen or Hoesem was a most unusual form of the name Huysen or Huizum..

But according the Historical info about the the place Huysen, the name changed over the centuries from Husma, Hwsmanghae, Husum, Huijsum, to now Huizum and it says those days it was pronounced as Hoesen or Hoesem...In the marriage record the place is written as 'Housum'

In Fries the place still is pronounced as Huzum.

Also interesting is that Jan was assisted by his cousin (nicht) Anna Jans at the marriage, with relatives present at the marriage, it made me think that perhaps he indeed was from the Dutch place Huysen on the Zuider Zee as was suggested by the Genealogies of the family ?

Bea (Timmerman) Wijma
His LNAB needs to be corrected as well I guess, according the marriage record, he was :

Jan Fransz from Husum , varensgezel , living in the ... street , geen ouders (no parents)

Carrie Quackenbush
Van Hoesen-41 and Van Hoesen-26 appear to represent the same person because: This is the oldest paternal ancestor in this chain in need of a merge into the NNS PPP. No tree conflicts. Thanks!
posted Jul 08, 2016 by Carrie Quackenbush

Steven Mix
Van Husum-1 and Van Hoesen-41 appear to represent the same person because: This is the oldest paternal ancestor in this chain in need of a merge into the new NNS PPP. No tree conflicts. The important data to keep from this match is Died May 25, 1667 in Claverack, Albany Co, New York, US. Thanks!
posted Jul 01, 2015 by Steven Mix
Barbara X
Jan Frans van Hoesen was born ab. 1608, he married Volkje Juriaens age 21 years when he was 30 years old their marriage banns are recorded 30 April 1639 in Amsterdam. More data on rootsweb Hoesen message board.

Steven Mix
UNKNOWN-109627 and Van Husum-1 appear to represent the same person because: This is the oldest paternal ancestor in this chain in need of a merge. No tree conflicts. I saved all the data to the bios. Thanks!
posted Aug 02, 2014 by Steven Mix

Jan is 13 degrees from Donald Howard, 14 degrees from Julia Howe and 16 degrees from Henry VIII of England on our single family tree. Login to find your connection.