Malcolm Fraser was asked to take over the job of Prime Minister by the Governor-General Sir John Kerr when Gough Whitlam was dismissed in controversial circumstances in 1975. Fraser won the subsequent election by a landslide. He was Prime Minister for seven and a half years.

John Malcolm Fraser was born in Toorak, Victoria, on 21 May 1930. He's known by his middle name - Malcolm. He was the second of two children of Una Woolf, of Jewish descent, and John Neville Fraser, a pastoralist of Scottish descent who had trained as a lawyer, owned property in the Riverina district of New South Wales. He then bought 'Nareen', a station near Hamilton, Victoria, for his family to live on. Malcolm Fraser's grandfather, Simon Fraser, emigrated from Nova Scotia in 1853 and became a land speculator and pastoralist. Simon Fraser entered Victorian parliament, participated in the Federal Conventions of 1897-1898 and became a Senator at Federation.

Malcolm Fraser was educated at Geelong Grammar preparatory school, Toorak, Victoria, then Tudor House, Moss Vale, New South Wales, before going on to Melbourne Grammar at 14. He went to Oxford University, UK, where he graduated with a degree in philosophy, politics and economics. He worked as a grazier at 'Nareen' after returning from Oxford.

Malcolm Fraser unsuccessfully contested the federal seat of Wannon as the Liberal candidate at the 1954 general election, but was elected in 1955. He was a Minister from 1966 to 1972, and was elected Liberal Party Leader in 1975. He won three elections and served 7 years as Prime Minister. During his almost eight years as Prime Minister, Mr Fraser approved the mining and export of uranium from the Kakadu region and completed the passage of the Aboriginal Land Rights (Northern Territory) Act 1976, which was introduced under Prime Minister Gough Whitlam. But it was not until his post-political life that Mr Fraser spoke out most strongly on Indigenous issues, even chastising his former Liberal colleagues for their policies and decisions. Most notably he expressed concerns about the NT government’s Stronger Futures in the Northern Territory policy of 2012, which was an extension to the National Emergency Response legislative package introduced by the Howard Government in 2007 (better known as the NT Intervention)[1].

He became engaged to and married Tamara Margaret ('Tammie') Beggs in 1956,[2] and they had four children.

Sponsored Search by Ancestry.com
DNA Connections
It may be possible to confirm family relationships with Malcolm by comparing test results with other carriers of his ancestors' Y-chromosome or mitochondrial DNA. Y-chromosome DNA test-takers in his direct paternal line on WikiTree: It is likely that these autosomal DNA test-takers will share DNA with Malcolm: 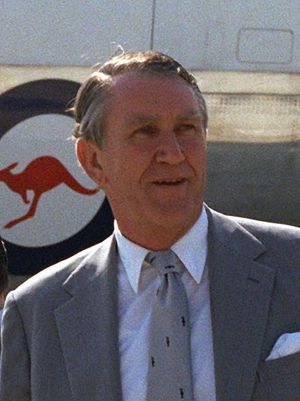 Malcolm is 27 degrees from Donald Howard, 22 degrees from Julia Howe and 18 degrees from Henry VIII of England on our single family tree. Login to find your connection.