Robert Frost was born on 26 March 1874 in San Francisco, California.

His mother, Isabelle (Moodie) Frost, was of Scottish descent; his father William descended from colonist Nicholas Frost from Tiverton, Devon, England who had sailed to New Hampshire in 1634.

Robert's family were Swedenborgians, and he was raised in that religious tradition, but did not remain as an adult. He wrote: “I was brought up a Swedenborgian. I am not a Swedenborgian now. But there’s a good deal of it that’s left with me. I’m a mystic. I believe in symbols.”[1]

William had hoped that Robert would become an editor in San Francisco, like William was. However, when William died in 1885 the family moved east back to Lawrence, Massachusetts.

Frost's first poem was published in his high school newspaper.

After graduating from high school, Frost attended Dartmouth College. He returned home to teach and work various labor jobs. He hated these jobs and felt his true calling was poetry.

Although he is known for his rural poetry, Frost spent his childhood in the city.

Frost's first paid poem was My Butterfly: An Elegy, published on 8 November 1894. He received $15 for the poem.

He soon proposed to Elinor Miriam White, who said she first wanted to finish college. Frost, a bit dismayed, traveled to the Great Dismal Swamp in Virginia and, upon his return, asked Elinor again. This time, she agreed.

Frost then went on to attend classes at Harvard for two years, where he did very well.

His grandfather purchased a farm for the couple in Derry, New Hampshire. Frost worked the farm for nine years while he wrote many of the poems which would later make him so famous.

He was unsuccessful as a farmer and returned to teaching English at Pinkerton Academy from 1906 to 1911.

In 1912, Frost took his family to Great Britain and settled in Beaconsfield, near London. His first book of poetry, A Boy's Will, was published only a year later.

A Boy's Will includes the poems Into My Own, My November Guest, Stars, To the Thawing Wind, A Prayer in Spring, Flower-Gathering, Rose Pogonias, A Dream Pang, In Neglect, The Vantage Point, Mowing, Going For Water, Revelation, The Tuft of Flowers, The Demiurge's Laugh, Now Close the Windows, In Hardwood Groves, October, Reluctance, The Trial by Existence, Pan With Us, A Line-Storm Song, My Butterfly, Ghost House, Love and A Question.

Some of Frost's most memorable work was written while he was in England.

Frost returned to America in 1915 when World War I began. He purchased a farm in Franconia, New Hampshire and launched his career in writing. This home would serve as his summer home until 1938 and it is maintained even today as "The Frost Place", a museum and poetry conference site. However, in 1920 he moved from New Hampshire to Vermont. His stated reason was "to seek a better place to farm and especially grow apples."

Frost also spent a great deal of time teaching at many schools an universities. He emphasized public speaking and the voice used when reciting poetry.

Although Frost's poems are beautiful, his life was filled with grief and loss. When his father died of tuberculosis in 1885, the family was left with only $8. His mother died of cancer in 1900. Also in 1900, Frost's son Elliot died of cholera before his 4th birthday. In June, 1907, his daughter Elinor died shortly after her birth. In 1920, Frost committed his younger sister, Jeanie, to a mental institution. She would die only 9 years later. Frost himself suffered from depression, something which ran in his family. His son, Carol, committed suicide in 1940 at age 38. Frost would have to commit another loved one to a mental hospital in 1947 when his daughter Irma succumbed to schizophrenia. Frost's wife, in addition to suffering from depression, developed breast cancer in 1937 and died of heart failure in 1938. Of their six children, only daughters Lesley and Irma outlived their father.

Robert Frost died on January 29, 1963, in Boston, of complications from prostate surgery. He was buried at the Old Bennington Cemetery in Bennington, Vermont. The epitaph on his gravestone reads, "I had a lover's quarrel with the world."

Robert Frost planned to recite a poem at the inauguration of president John F. Kennedy. He called the poem Dedication.

Robert Frost was 87 at the time. He claimed that the bad glare from the sun prevented him from reading his poem. He stumbled over his words and his flow was off due to his unfamiliarity with the poem. He quickly gave up and instead recited The Gift Outright.

William Prescott Frost was Robert Frost's grandson. He and his family lived in Panama City, Florida as part of Bill's career as a naval architect. Robert "Bob" Frost (1952-2011) was his son and a professor at the University of Michigan. William Prescott Frost had one other son, but not one named "Bill."

posted 29 Aug 2014 by Douglas Wilber II   [thank Douglas]
Gerald Mixon
A little further net reserch reminded me that I also knew Bill Frost. The Panama City connection is already known information and further family information can be found by entering a search for Carol Frost, Panama City, Fl. If you don't find it go to www.ns.umich.edu/MT/96/Win96/mta4w96.html. The info in the article would indicate that the man I met was William Prescott Frost. Apparently Bob was the younger brother of Bill and Carol, both schoolmates of mine.
posted 7 Mar 2010 by Gerald Mixon
Gerald Mixon
Around 1965 I was a high school student in Panama City,Fl. A casual friend was a lovely young lady named Carol Frost. While I was in the hospital she dropped by and told me that she was there visiting her father and she mentioned that her father was the son of the poet Robert Frost. I made a point of meeting him and he verified this although I don't recall his name. I never met him again or talked to her about her family or why they were living in Panama City. I have since read that Robert's son, Carol, died in 1940 so this could not be the man that I met. Possibly I misunderstood and he was the grandson of Robert?
posted 7 Mar 2010 by Gerald Mixon
Login to add a memory.
Sponsored Search by Ancestry.com
DNA Connections
It may be possible to confirm family relationships with Robert by comparing test results with other carriers of his Y-chromosome or his mother's mitochondrial DNA. However, there are no known yDNA or mtDNA test-takers in his direct paternal or maternal line. It is likely that these autosomal DNA test-takers will share some percentage of DNA with Robert: 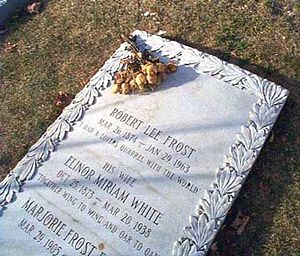 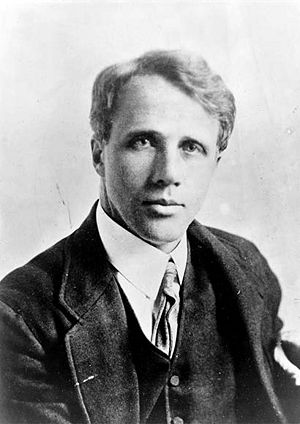 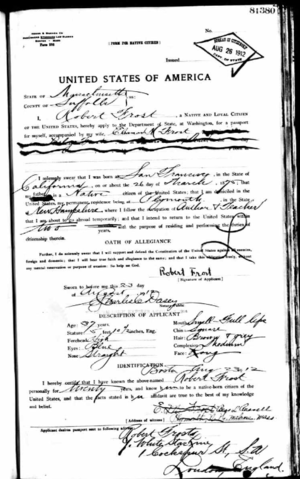 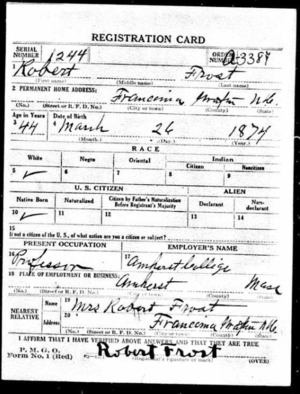 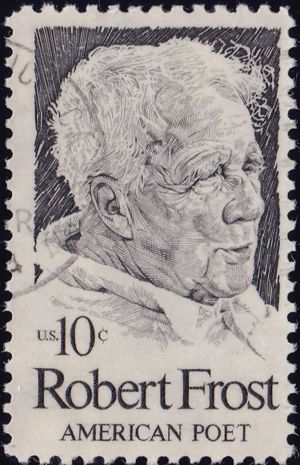 Leave a message for others who see this profile.
There are no comments yet.
Login to post a comment.
April Rarick
In the Reminisce magazine there is a article written by someone that spent two days at a University in Ohio in 1960 with Robert Frost. The August September 2017 issue. I just read the article and thought it brought out the person Robert Frost was.
posted Oct 22, 2017 by April Rarick