Edward Fuller, son of Robert Fuller, butcher, and Sarah Dunkhorn, was christened on September 4, 1575 at St. Mary's in Redenhall, Norfolk, England, England. [1] [2] [3] Edward and Samuel (also a passenger on the Mayflower) and their siblings were named in their father's 1614 will. Edward was left a tenement (after the death of Robert's wife) and twenty pounds[4]

Edward and his wife had two sons, Matthew Fuller and Samuel Fuller, who were probably born between 1597 and 1612. The family was probably part of the group of religious dissidents known as Separatists who moved to Leiden, Holland to escape persecution in England. Edward's brother, Dr. Samuel Fuller, belonged to this group. Edward, his wife, and their son, Samuel, left Holland on the Speedwell, and were transferred to the Mayflower, which arrived in the New World at the end of 1620. He and his wife both died the first winter, soon after the Mayflower arrived at Plymouth. The boy, Samuel, was left to the care of Edward's brother, Dr. Samuel Fuller. "Edward Fuller was the 21st signator of the 41 men who signed the Mayflower Compact. It was an agreement providing for the temporary government of the colony by the will of the majority, and therefore the first commitment to Democracy in America." (quoted from Wilson.ged as imported on 14 September 2010)

For more on the trip across the Atlantic, see: Space:The_Voyage_of_the_Mayflower

Y-DNA Results R-Y85916 Previous Y-STR testing[6] through the Mayflower Society DNA Project[7], including descendants of both Edward and Samuel Fuller, has found where the Mayflower Fuller lineage belongs to the R1b-U106 Y-DNA haplogroup, which is quite common in Northwestern Europe. NGS/WGS testing will be able place the Fuller lineage more precisely within the broader R1b-U106 haplogroup and may be able to identify individual-level markers that indicate descent from either Edward or Samuel. NGS/WGS testing As of 21 May 2021, the Mayflower DNA Project and the Fuller - Family Finder Project are displaying nine individuals as patrilineal (all male line) descendants of Edward Fuller, two additional individuals as patrilineal descendants of his brother Samuel, as well as a total of twelve individuals who likely descend from Robert Fuller of Salem & Rehoboth.[8] These results document where the Fuller family of Redenhall, Norfolk fall under U106>>S12025>FGC12021>S17339>FGC53777>S25007>FGC31905>FGC53757>BZ3170>Y85916. In addition, they document where some descendants of Edward Fuller[9] fall under a subclade of Y85916, namely FT14518.[10]

Sponsored Search by Ancestry.com
DNA Connections
It may be possible to confirm family relationships with Edward by comparing test results with other carriers of his Y-chromosome or his mother's mitochondrial DNA. Y-chromosome DNA test-takers in his direct paternal line on WikiTree: 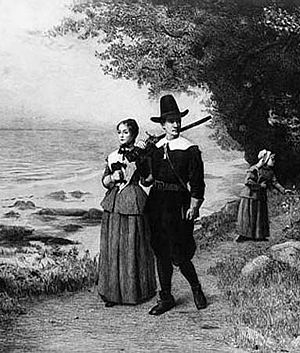 Darlisa Black
I have been reading papers about this family all day until my eyes are buggy, and see there are some interesting conflicts on details pre Mayflower... I was reading some of "The Fuller family in England and America" [1] which I suspect is very outdated with more modern research. In the book it is claimed in detail that the father of Edward and Samuel of the Mayflower fame was Nicholas Fuller. Here I see it is said to be Robert Fuller. Does anyone have better clarification?

And then to confuse things more for many readers, Dr. Samuel Fuller , Edwards brother, took care of Edward's son Samuel after his father died, and taught him medicine. Edward's son Matthew named a son Samuel, as did his brother Samuel.

Darlisa Black
I agree, this is a beautiful and inspiring compilation of info into an easy to read Bio, thank you!
posted May 13, 2021 by Darlisa Black

Ancestry is sourcing the 2004 reprint of Torrey's original work as their Green Leaf Hint.

I don't think "Ancestry Family Trees" should be listed as a source because most of them about this are wrong.

Becky (Nally) Syphers
Wife changed back to Ann Unknown. In fact, even her first name may be a 19th century error. So far, no contemporary primary source documentation has been produced to prove who the wife of this Edward Fuller was.
posted Jul 04, 2014 by Becky (Nally) Syphers

Jillaine Smith
The biography indicates his wife's maiden name is unknown, but the woman linked to as his wife is identified. What is the source for her identity? Or should she be changed to Unknown Unknown?
posted Jul 04, 2014 by Jillaine Smith

Sue Fitzpatrick
nice job. This is a nice example that could be followed for other projects
posted Nov 09, 2012 by Sue Fitzpatrick