James was born about 1906, according to the 1910 census; but according to his grave stone, it was 1904 (Find a Grave); but according to an obituary, "Jim was born on Nov. 26, 1903, near Arcadia, Wis., to George Sr. and Dolly (Thunderchief) Funmaker. While he was a youngster, the Funmaker family lived on the George Funmaker homestead near Black River Falls and spent the fall and spring camped near Arcadia where they trapped on the Trempealeau and Mississippi rivers." (LaCrosse Tribune) Tom Jones, his grandson, confirms the 1904 date. (van Schaick, 27)

Naxíxųnųnįka is a birth order name for the fifth son. Hąhĕ́mąnįga is a Bear Clan name meaning "Night Walker," a reference to the nocturnal habits of bears. Hąhĕ́maniga is from hąhĕ́, "night"; mąnį́, "to walk"; and -ga, a definite article suffix used in personal names. "Jim attended Cortland School near Arcadia, the Komensky School, the Tomah Indian School, and the Wittenburg Indian School." (LaCrosse Tribune)

"Jim had been employed at the Badger Ordinance Works at Baraboo. He was mainly employed, however, as a finish cement and stone mason and was a life member of Local 127. Following his retirement from being a mason, he was employed for several years at the Amundson Cranberry Marsh." (LaCrosse Tribune)

"Jim was an avid sportsman and enjoyed hunting, fishing, and trapping."

"He married the former Nancy Davis in 1933 and she died at the age of 57. To this union were born seven children, Walter W. (Gail) Funmaker of Hatfield, Annarae Funmaker of Black River Falls, Prudence (deceased), JoAnn (Thomas) Jones of Baraboo, Bonnie (Sheldon) Hanson of Augusta, and Joyce (John) Warner of Madison, and Prudence (deceased).

Tom Jones recalls, "When my grandfather was ninety-eight years old [2002], my mother asked him who his friends were when he was young. His reply was, 'I didn't have any friends.' Because our elders are constantly joking I thought he was too, so I laughed. He paused and then continued to say that his father, George Funmaker Sr. kept his family and children away from others during times of sickness. Tuberculosis and influenza were going around at this time. It was a few years before my grandfather's birth in 1904 that smallpox was brought into the tribe again. These diseases killed many people within the tribe ..." (van Schaick, 23-24) 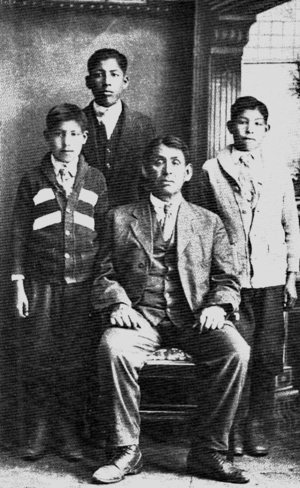 James Funmaker as a Boy, by Charles van Schaick