This person was created through the import of CampFamily.ged on 14 March 2011. The following data was included in the gedcom. You may wish to edit it for readability.

Note: NAME: The native form of this personal name is Gábor Éva. This database uses the Western name order.

MARRIAGE: Like her sisters, Eva Gabor was known for her string of marriages; she had five:
1. 1939-1942: Eric Drimmer, a Swedish physician
2. 1943-1950: Charles Isaacs
3. 1956-1957: John Williams, an American physician
4. 1959-1972: Richard Brown
5. 1973-1983: Frank Gard Jameson
FAMILY: Eva Gabor had no children.
BIOGRAPHY: Eva Gabor (February 11, 1919 - July 4, 1995) was a Hungarian-born socialite and actress. Best known for her role as Lisa Douglas, the wife of Eddie Albert's character Oliver Wendell Douglas, on Green Acres. Unlike her sisters Eva had great success as an actress in film, Broadway and television. Her elder sisters, Zsa Zsa Gabor and the late Magda Gabor, were also actresses and socialites. All three siblings were well known for their many marriages an
DEATH: Eva Gabor died on July 4, 1995, aged 76, from respiratory failure and pneumonia in Los Angeles, California following an accident in which she lost her balance and fell into her bathtub in Mexico, where she had been on vacation.
Although the youngest of the three sisters, she was the first to die. On April 1, 1997, her 100-year-old mother, Jolie, died, unaware of Eva's death. On June 6, 1997, her eldest sister Magda died from renal failure.
BURIAL: Eva Gabor is interred in the Westwood Village Memorial Park Cemetery in Westwood, California. She is buried near her Green Acres co-star Eddie Albert, who died on May 26, 2005, at the age of 99.
d divorces.

Is Eva your ancestor? Please don't go away!

ask our community of genealogists a question.
Sponsored Search by Ancestry.com
DNA
No known carriers of Eva's ancestors' DNA have taken a DNA test. 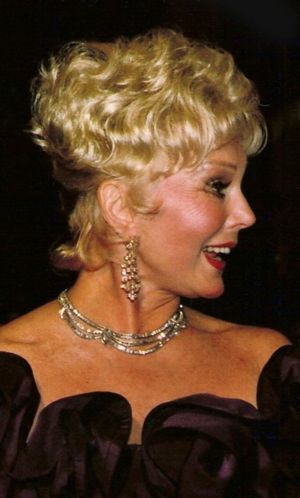 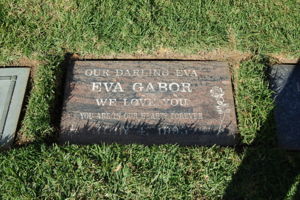 Leave a message for others who see this profile.
There are no comments yet.
Login to post a comment.
[Living Sälgö]
.
posted Sep 25, 2016 by [Living Sälgö]

Eva is 23 degrees from Jaki Erdoes, 21 degrees from Wallis Windsor and 19 degrees from Henry VIII of England on our single family tree. Login to find your connection.