Jacob Gabbard was born about 1760 in North Carolina. He married Margaret Smith about 1785. No marriage record found, but they were probably married in Washington County [later Carter Co], TN.

There seem to be no land records for Jacob Gabbard in North Carolina, Tennesse, or in Virginia. His first record is in Burke Co NC when he joined the local Militia.

His Revolutionary pension file #530431 states Born about 1760 in Rowan/Lincoln Co, North Carolina. [Actually he was born in the Shenandoah Valley in VA but came to NC as a small child] Enlisted for 18 months, June 1780 from Burke Co NC. He mentioned a rendezvous at his grandfather's Michael Grindstaff. Unfortunately Jacob became ill with small pox and did not leave with his unit to join Gen. Greene's forces in SC. When he was well he served under Capt John Bickerstaff fighting Tories in Burke & Lincoln Counties. He then joined a regt commanded by Col. Benjamin Cleveland and marched agains the Tories in Wilkes & Surrey Counties. He did eventually march south to join General Greene; between Salisbury & Camden there was a skirmish in which he was impaled through the thigh by a pine rail fence during a charge. He was confined to a military hospital in Camden for 6 or 7 months at which time he witnessed the death of Adam Grindstaff, likely a cousin. After his recovery, he served as a guard under Capt Brevard at Camden until his tour was up. Upon returning to Burke Co he was again drafted and served for six months fighting the Indians.

Jacob applied for his penions in Clay Co KY in 1834 when he declared his age as 74. There were several difficulties with his testimony which required further examination and it was not until 14 Oct 1835 that a Certificate of Pension was issued but it was retroactive to 4 of March 1835. In 1853, he requested an increase; he died soon after.

Jacob is believed to have moved over the mountains to Washington Co TN about 1783, perhaps with members of the Grindstaff family. He married Margaret Smith, daughter of Edward Smith about 1785, probably near the forks of the Watauga & Elk Rivers and Roand and Doe Creeks. This is on the line of present day Carter & Johnson Counties. Edward Smith owned inns on the main road between North Carolina and the Watauga county, first in NC and then after 1783 in Tennessee. Edward Smith bought 640 acres on Iron Mountain that also bordered Jacob's brother George's NC grant. The family of Cornelius Bowman was in the same neighborhood and his son John married Margaret Smith's sister Sarah, at about this same time. The book TENNESSE SMITHOLOGY stated instead that Margaret Smith had married a George Gabbert in Washington Co TN on 27 Dec 1787 - there is no source citation. There was a George living next to Edward Smith in Washington Co. Jacob's brother George did indeed marry a Catherine Smith on 27 Dec 1787; her parentage not identified. Edward Smith did have a daughter Catherine who was identified in Edward's will in 1807 as Catherine Peevyhouse.

In 1793 Jacob enrolled for three months in a Sullivan Co TN militia unit. By 1796 and 1797, Jacob was living just across the state line in Washington Co, Virginia where most of Gabbards lived for awhile. Jacob Gabbard was on the 1798 tax list back in Carter Co TN ("Early TN Tax Records" by Creekmore). From 1803 to 1806, Jacob was back in Washington Co Virginia. By 1808, Jacob and family had moved to Lincoln Co KY. He is enumerated in the 1810 census of Lincoln Co KY and appears in 1815 on the Clay Co KY tax list. He is in the 1820 Clay Co Census. In 1840 Jacob Gabbard is in the Laurel Co Census. In 1850 he is living with his grandson John Wesley Gabbard in Madison Co.

Jacob and his brother Henry [or half-brother] moved to Clay Co KY [area that would become Owsley in 1842] about the same time - they were both on a tax list for the first time in 1815. Henry settled on Indian Creek, a tributary of the South Fork, and his descendants tended to remain on that side of the county or drift into Breathitt Co. Jacob seems to have settled first on the waters of the South Fork near Henry. However, Jacob Jr and other descendants settled on Sturgeon Creek on the other side of the county. Jacob Sr and his son Edward moved to Jackson Co near the border of Owsley where Jacob Jr lived.

GABBARD FAMILY NEWSLETTER had an article that might explain the origin of some of the confusion on this family Vol. 4, No. 4; Dec 1994 "Descendants of Jacob Gabbard, Pioneer" p.13.

He believed that Jacob was married to a Woods, a daughter of Samuel Woods. He also thought he was the son of George Gabbard & wife Margaret Smith. Actually George was Jacob's brother, possibly half-brother, and his wife was Catherine Smith. Jacob himself was married to Margaret Smith. This researcher did have a correct list of children for Jacob.

ask our community of genealogists a question.
Sponsored Search by Ancestry.com
DNA Connections
It may be possible to confirm family relationships with Jacob by comparing test results with other carriers of his Y-chromosome or his mother's mitochondrial DNA. However, there are no known yDNA or mtDNA test-takers in his direct paternal or maternal line. It is likely that these autosomal DNA test-takers will share some percentage (beta) of DNA with Jacob: 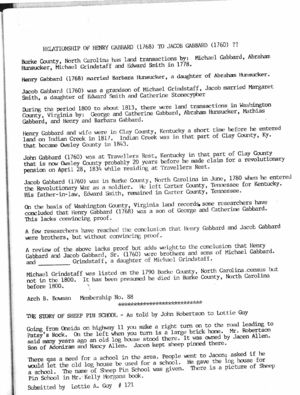