Gerald R Gabet, 73, of New Haven, died Thursday in Parkview Memorial Hospital, in Ft. Wayne. He was born May 14, 1921 in New Haven to Joseph and Theresa (Vachon) Gabet. He married Hilda Becker and she survives. Mr Gabet, a lifelong New Haven resident, retired in 1986 after 28 years as a cost estimator for Magnavox Corp. in Ft Wayne. He was a Veteran of World War II, and a member of St John the Baptist Catholic Church and quarter century club of Magnavox. Surviving with his wife are four daughters, four sons, two sisters, five brothers, Arthur, Walter, Joseph, Charles, and Norbert Gabet; 15 grandchildren, and two great-grandchildren.Burial will be in St John Catholic Cemetery, New Haven. (obituary excerpt)[1] (Note: Names of living persons removed for privacy reasons.)

ask our community of genealogists a question.
Sponsored Search by Ancestry.com
DNA
No known carriers of Gerald's DNA have taken a DNA test. 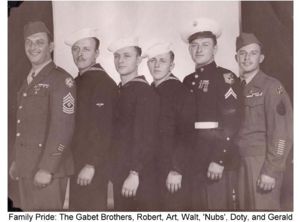 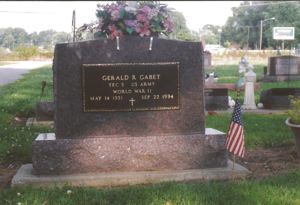 Gerald is 24 degrees from Mary Pickford, 22 degrees from Cheryl Skordahl and 21 degrees from Henry VIII of England on our single family tree. Login to find your connection.