The Whittinghill family book gives his wife's name as Christina, and his birth as ca. 1735 in Germany. His father was probably Johan George Gabhart, who came to Philadelphia from Germany in 1754.

Mathias was only three years old when the family arrived in Philadelphia on the ship Pennsylvania Merchant in 1731. They later moved to Virginia, where Mathias eventually settled in Rockbridge County, and died there in 1798. John Gabbert, son of Mathias and Christina, married Judith Tuley in Rockbridge County in 1792. They came to Mercer County, Kentucky about 1810, and then to Daviess County about 1815.

Mathias Gebert was baptized February 24, 1728 in Schwaigern, Württemberg, third child of Friedrich and Susanna Gebert. He was only three years old when he accompanied his family to America in 1731. By 1750, the family was in the Shenandoah Valley of Virginia. Frederick County survey records from the 1750s and 60s show Gottlieb Gabbord, Frederick Gabbord, Mathias Gabbert, Mathias Gabbord, Michael Gabbert, Mathias Gabart and Jacob Gabert.

About 1755, Mathias married Christina Bumgardner who was born in Shenandoah County. They were among the early settlers six miles below Lexington, in the Great Valley between the Appalachian and the Blue Ridge Mountains. Climatic conditions were favorable for many crops, including the profitable tobacco, and there was slave labor, introduced in 1619 from Africa, to work the fields.

Lexington, Virginia is situated on the banks of the North River which empties into the James River some twelve miles to the south.It is the seat of Rockbridge County. The town was laid out in 1777 and incorporated in 1841. After the early 1770s, records of Mathias, Jacob and Frederick are found in Augusta and Rockbridge County, Virginia but none have been found in Frederick (Shenandoah) County for any Gabbert, Gabart, etc. after that time. Mathias lived the rest of his life in Lexington, Virginia, passing away June 1, 1798. His will was probated 03 Jul 1798 in Rockbridge County, Virginia. -Broderbund Family Archive #354, Ed. 1, Passenger and Immigration Lists Index

Mathias Gabhart came from Germany, arriving 5 Oct 1737 in Philadelphia on the ship "Belander Townshead". He settled in the Shenandoah Valley.

Judgements, from "Records of Augusta County, Virginia" by Chalkley Circuit Court Bailor vs. Gabhart. O.S. 110 N.S. 38 Bill, 1 Dec 1805 Orator is George Baylor, executor of Jacob Bailer, his father. Jacob bought land of Mathias Gabbart in Augusta. Conveyance was not made. Mathias is dead, testate, but intestate as to his land, leaving children, viz: George, Michael, Peter, John, Hannah, Sally, Catherine since intermarried with Jonathan Intsminger, Peggy since intermarried with Benjamin Hart, Christina since married to Peter Gabhart. Bill in the name of Jacob Baylor says purchase was made in 1780. Jacob was a German, lately removed from Pennsylvania. Jacob Baylor's will is recorded in Staunton District Court. [My notes: The children don't quite agree with Mathias Gabbert's will of 1798. "Peggy" may be the daughter Rebecca; daughter Elizabeth named in Mathias' will was omitted - she was the daughter married to Jonathan Entsminger, Catherine was married to Peter Whitinghill.]

Is Mathias your ancestor? Please don't go away!

ask our community of genealogists a question.
Sponsored Search by Ancestry.com
DNA Connections
It may be possible to confirm family relationships with Mathias by comparing test results with other carriers of his Y-chromosome or his mother's mitochondrial DNA. However, there are no known yDNA or mtDNA test-takers in his direct paternal or maternal line. It is likely that these autosomal DNA test-takers will share some percentage (beta) of DNA with Mathias: 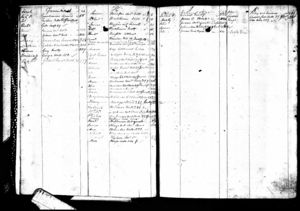 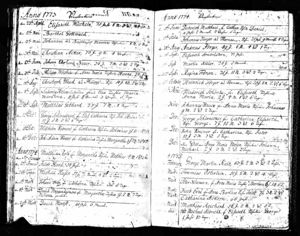 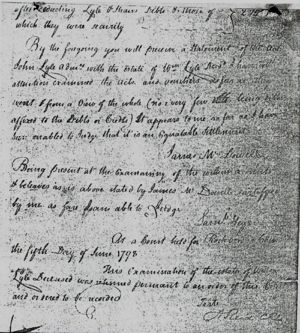 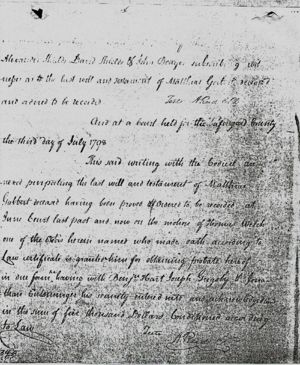