Gen Thomas Gage was a Loyalist in the American Revolution

Wikipedia -- "Gen. Thomas Gage (10 Mar 1718/9 – 2 Apr 1787) was a British Army officer best known for his many years of service in North America, including his role as military commander in the early days of the American Revolution.

Born to an aristocratic family in England, he entered military service, seeing action in the French and Indian War, where he served alongside his future opponent George Washington in the 1755 Battle of the Monongahela. After the fall of Montreal in 1760, he was named its military governor. During this time he did not distinguish himself militarily, but proved himself to be a competent administrator.

From 1763 to 1775 he served as commander-in-chief of the British forces in North America, overseeing the British response to the 1763 Pontiac's Rebellion. In 1774 he was also appointed the military governor of the Province of Massachusetts Bay, with instructions to implement the Intolerable Acts, punishing Massachusetts for the Boston Tea Party. His attempts to seize military stores of Patriot militias in April 1775 sparked the Battles of Lexington and Concord, beginning the American War of Independence. After the Pyrrhic victory in the June Battle of Bunker Hill he was replaced by General William Howe in October 1775, and returned to Great Britain." 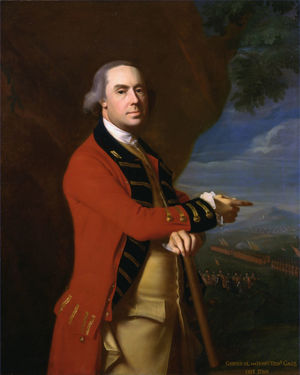 Find out more at the Global Family Reunion project."