Ken Galbraith is/was a significant Ontarian .
Galbraith was born to Canadians of Scottish descent, Sarah Catherine Kendall and Archibald "Archie" Galbraith, in 1908 in Iona Station, Ontario, Canada, and was raised in Dunwich Township, Ontario. He had three siblings: Alice, Catherine (who married a Denholm), and Archibald William (Bill). By the time he was a teenager, he had adopted the name "Ken", and later disliked being called John. Galbraith grew to be a very tall man, registering a height of 6 feet 8 inches.

His father was a farmer and school teacher. His mother, a homemaker and a community activist, died when he was fourteen years old. The family farm was located on Thomson Line. Both his parents were supporters of the United Farmers of Ontario in the 1920s.

His early years were spent at a one-room school, which is still standing, on Willy's Side Road. Later, he went to Dutton High School and St. Thomas High School. He graduated in 1931 from the Ontario Agricultural College in Guelph, which was an associate agricultural college of the University of Toronto at the time. They awarded him a Bachelor of Science in agricultural economics. He majored in animal husbandry. He was awarded a Giannini Scholarship in Agricultural Economics (receiving $60 per month) that allowed him to travel to Berkeley, California where he received a Master of Science and Ph.D. in agricultural economics from the University of California, Berkeley.

After graduation in 1934, he started to work as an instructor at Harvard University. Galbraith taught intermittently at Harvard in the period 1934 to 1939.From 1939 to 1940, he taught at Princeton University. In 1937, he became a United States citizen and was no longer a British subject.

On September 17, 1937, Galbraith married Catherine Merriam Atwater, whom he met while she was a Radcliffe graduate student. Their marriage lasted for 68 years. The Galbraiths resided in Cambridge, Massachusetts, and had a summer home in Newfane, Vermont. They had four sons: J. Alan Galbraith is a partner in the prominent Washington, D.C. law firm Williams & Connolly; Douglas Galbraith died in childhood of leukemia; Peter W. Galbraith has been a U.S. diplomat who served as Ambassador to Croatia and is a widely published commentator on American foreign policy, particularly in the Balkans and the Middle East; James K. Galbraith is a prominent progressive economist at the University of Texas at Austin Lyndon B. Johnson School of Public Affairs. The Galbraiths also have ten grandchildren.

John Kenneth Galbraith, economist, writer (b at Iona Station, Ont 15 Oct 1908; d at Cambridge, Mass 29 Apr 2006). Having graduated from Ontario Agricultural College (Guelph) in 1931, Galbraith received a doctorate in agricultural economics at University of California, Berkeley. Most of his active life was spent connected with Harvard, where postdoctoral work at Cambridge, England, had fitted him to replace Robert BRYCE as resident Keynesian.

An activist liberal, Galbraith was personal adviser to every Democratic candidate for the US presidency from F.D. Roosevelt to L.B. Johnson, and thus held a number of public positions including controller of prices in WWII and US ambassador to India (1961-63). He was active in Americans for Democratic Action, a group of eminent liberal intellectuals, particularly during its opposition to the Vietnam War.

Galbraith's contribution to social science is an alternative to the established, neoclassical concept of capitalism. In a number of books, including American Capitalism (1952), The Affluent Society (1958) and The New Industrial State (1967), he established a basis for liberal policy on the ideas of "countervailing power,""conventional wisdom," the "technostructure" and the institutional "convergence" of communist and capitalist systems. In 1956 he testified before the Royal Commission on Canada's economic prospects and, at the request of Canadian Pacific, he watched over the production of R.E. Caves and R.H. Holton on Canadian Economy: Prospect and Retrospect (1959).

The Scotch, Galbraith's entertaining account of his boyhood environment in southern Ontario, was published in 1964. His Age of Uncertainty (1977) was televised in a series on BBC. He is the author of Anatomy of Power and A View from the Stands: Of People, Military Power and the Arts (1986).

His liberal interventionist theories became displaced in the 1980s when conservative fundamentalism became an attractive alternative. A Journey Through Economic Time (1994) and The Culture of Contentment (1992) were Galbraith's rebuttals to conservative economic policy and their failure to revive Western economies from recessionary trends and succeeded in bringing many of his theories back into vogue. In The Socially Concerned Today (U of T Press 1998) Galbraith recorded his views on what the socially concerned society should be today, and reflected on the principles of distribution of wealth, flaws in the market system and the state of higher education.

John Kenneth Galbraith was a famous economist. He was a witty commentator on America's political follies and a versatile author of bestselling books that warn prophetically of the dangers of deregulated markets, corporate greed, and inattention to the costs of our military power (among them The Great Crash: 1929, The Affluent Society, and The New Industrial State). Galbraith always made economics relevant to the crises of the day.

Is Ken your ancestor? Please don't go away!

ask our community of genealogists a question.
Sponsored Search by Ancestry.com
DNA
No known carriers of Ken's ancestors' DNA have taken a DNA test. 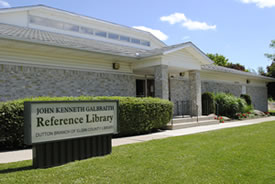 Ken is 26 degrees from Donald Howard, 21 degrees from Julia Howe and 22 degrees from Henry VIII of England on our single family tree. Login to find your connection.