Susan Agnes Gallier was born in Beaumont, TX on June 21, 1917 to Jacob John Gallier[1] and Theresa Babin Gallier[2][3].[4] She was the youngest of five children and named for her paternal grandmother Susan Frugia Gallier. [5]

Susan attended Catholic School and would tell the story of how the nuns decided the girls should wear silk hose. The girls didn't like this so each day, on the way home, they'd make a run in their hose. The hose weren't cheap so the mother's made an outcry.. having to buy hose each day. Pretty soon the nuns relented on the silk hose requirement.[6]

Sue's friends recalled her as having a somewhat sarcastic sense of humor. Her friend Alice, told how the nun once said in class that "Curiosity Killed the Cat" and Susan whispered "But satisfaction brought it back." The nun heard them giggling and made Susan repeat what she had said. Her friend did not say how the nun responded. [7]

Her best friend Catherine remembered them singing and playing piano at Catherine's house. Soon Catherine's mother would give them each a dime and suggest they walk to the Drug Store. Catherine recalled that Sue would say that they were being paid not to sing. [8]

Sue and her friends went to St. Anthony's High School and Catherine writes about one particular photo she enclosed with her stories.

"Every year we would have class picnics at LaBelle. Out south of Beaumont, some of the parishioners from St. Anthony’s had this farm (the Heberts and the Broussards) with a pond for swimming and they let the students have their picnics; Usually freshmen and sophomores together, then the juniors and seniors. I was a junior and Sue and my brother Dan were seniors so I did a lot of things with the older class." [8]

After graduation, Sue took some business courses and began to work at Beaumont City Hall. She would tell stories of falling asleep at her desk after late nights out with her future husband. She also told of caring for some baby lion cubs under her desk. I don't remember the details of that other than something about the zoo not being able to care for them just then. [6]

Meeting and Marrying Her Future Husband [5]

Leroy would come to Beaumont, TX on occasion to visit his sister, Alma Friebel Herm. Leroy was quite close with his nephew Victor Herm, because they were only a year apart in age. As it turned out Victor was engaged to Susan Gallier's best friend, (Mary)Catherine Herm. When ever Leroy would come to town, Vic would want Catherine to fix him up. He never seemed to have a good time. Catherine told Vic she wouldn't fix him up anymore. So Christmas Eve 1939 came around and Vic, Catherine, and Susan were going to midnight mass. Vic asked his uncle if he wanted to come along and he said okay.

Catherine wrote the following: "When we went to Sue’s she was putting a few last minute decorations on the Christmas tree. She later told us that when we came in with this nice looking young man she wondered who he was because we had said we would have Victor’s uncle and she kept looking for an old man.

Well, it was love at first sight for both of them and Sue always said she got him off the Christmas tree. He had enlisted in the Navy and was making one last visit to Beaumont to see the family when he met Sue." [8]

As Leroy was in the Navy, their time spent together was limited. Even before they were married she'd on occasion meet him at some city where he was stationed. Her sister writes:

"I do remember he wanted Sue to come to San Diego while he had a short leave and she decided to go. Pop wouldn’t hear of her going alone so Mom had to go with her. Leroy rented a room for them with a Mrs. Breed. Mom and Mrs. Breed had a good time together and so did Sue and Leroy, but Mom did have several meals with them." [5]

They were married on February 17, 1941 in the rectory of St. Anthony's Church in Beaumont, TX.[9] Because Leroy wasn't Catholic, he was to take instruction from the priest for several days or a week, but because the priest wanted to marry them before they left for Leroy's next post in Washington, DC, he agreed to do the instructions in one day. [5] He had to promise to raise all of their children Catholic, which he did. Even when his youngest boy began going to a Baptist Church when he was in high school, Leroy insisted that he also go the Catholic Church until he was 18 years of age. [6]

When the attack on Pearl Harbor occurred Leroy was stationed out of Pearl Harbor and Susan was 8 months pregnant with their first child. Her family tried to keep the news away from her, but even without TV and the internet, they weren't able to. Fortunately, Leroy was out on patrol during the attack.[6]Their son, nicknamed Sparky, was recognized as the First War Baby in Beaumont. Other babies had been born before him, but he was the first with a father in the war. [5]

Through Leroy's naval years (he received an honorable discharge in 1947 after 10 years of service), Sue, Spark, and another son who followed in 1943 would move from post to post. At different times they lived in Washington, D.C., San Diego, CA, Washington, Virginia, New York, and San Francisco. [6]

They bought and settled down in a house in a suburb of San Francisco. They would live the rest of their lives there and raise their six children. The home still remains in the family.

Sue was active with the elementary school PTA for all of her children. Since there was nearly a 21 year age spread, she spent almost 30 years in that PTA and received a Lifetime Achievement Award when her youngest moved on to middle school. She also was a Brownie leader for her first daughter's troop.[6]

After Leroy retired and their youngest (me) graduated high school they began to travel a lot. It was difficult for her to agree to fly anywhere but once she did, she was hooked. All of those family road trips were extra work for her... now she could be where she was going fast. They also enjoyed taking cruises.[6]

Suffering from Type II Diabetes along with some other ailments, she never got her health back after having her gall bladder removed in 1987. She passed away on Halloween in 1989. Her death certificate reports the cause of death as cardio respiratory failure, congestive heart failure, and arteriosclerosis. [10]She is buried at Skylawn Memorial Park in San Mateo, CA next to her husband.

Thanks to Donna Storz for starting this profile. Click the Changes tab for the details of contributions by Donna and others.

Is Sue your relative? Please don't go away!

ask our community of genealogists a question.
Sponsored Search by Ancestry.com
DNA Connections
It may be possible to confirm family relationships with Sue by comparing test results with other carriers of her mitochondrial DNA. Mitochondrial DNA test-takers in the direct maternal line: It is likely that these autosomal DNA test-takers will share DNA with Sue: 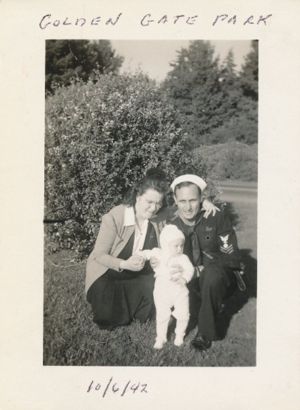 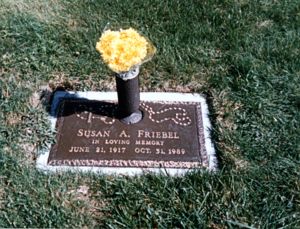 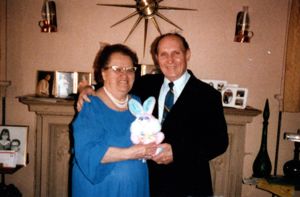 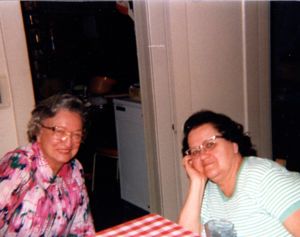 Sue is 15 degrees from Danielle Liard, 18 degrees from Jack London and 19 degrees from Henry VIII of England on our single family tree. Login to find your connection.