The name of her burial church is Church of St. Peter with St. James in Brackley, an ancient, still active parish church.

Helen (also known as Ela or Elena) had two half-sisters and co-heiresses, Devorguilla (or 'Derborgaill', mother of King John of Scotland), and Christina (or 'Cairistiona'). Helen, eldest daughter and co-heiress of Alan, Lord of Galloway. Countess of Winchester. Without legitimate sons to succeed him, Alan's lands and dignities were divided between the husbands of his three daughters, so Roger acquired Alan's position as Constable of Scotland, and one-third of the lordship of Galloway (although the actual title of Lord of Galloway went through Helen's half-sister Devorguilla to her husband John I de Balliol).

The three daughters of Roger and Helen of Galloway were:
Helen (also known as Ela or Elena), who married Alan Baron Zouche of Ashby;
Elizabeth (also known as Isabella) married Alexander Comyn, 2nd Earl of Buchan;
Margaret married William de Ferrers, 5th Earl of Derby (and was thus stepmother to her own stepmother).

ask our community of genealogists a question.
Sponsored Search by Ancestry.com
DNA
No known carriers of Ellen's DNA have taken a DNA test. 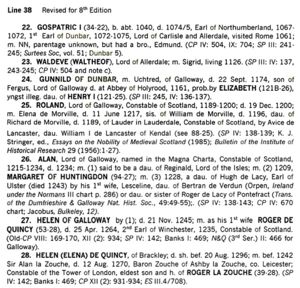 Leave a message for others who see this profile.
There are no comments yet.
Login to post a comment.
David Franklin Robinson (1935-2018)
Vallibus-1 and Galloway-198 are not ready to be merged because: A few more details on Vallibus-1 (parents, children) would help me be sure this is one person!
posted Jan 20, 2016 by David Franklin Robinson (1935-2018)