John Galphin was a Native American and member of the Creek tribe.

John was born about 1748. He is the son of George Galphin, a man of Irish decent, and Metawney Unknown, a Creek Indian woman. His mother was a member of the Tyger Clan of the Lower Creeks as noted on her profile.

John Galphin was one of three sons, and two nephews who George Galphin turned his mercantile business over to in 1773. A letter dated the 27th of Aug 1773 from Silver Bluff near Augusta, Georgia addressed to Messr. Greenwood & Higginson, Gentlemen stated that "with this you will please received a letter from Mr. George Galphin informing you that he has declined all his mercantile business in favor of us vizt. his three son's, George, Thomas & John Galphin, his nephew's David Holmes and John Parkinson, and you will understand by the same that he has guaranteed all our dealings with you...[1] The company was then known as Galphin Holmes & Co. according to the letter, and subsequent documents.

George Galphin made a deed of Trust on the 2nd day of Feb 1775 to the trustees named as Locklin McGillvery, John Parkinson, John Graham, Alexander Wyly, George Galphin the younger, and Thomas Galphin in consideration of the love and affection which he hath and "beareth" unto John son of "Matorney" a Creek Indian woman which also noted, In trust for his the said John brother and sister George and Judith, and also Thomas & Martha son and daughter of Rachael Dupee to be shared in manner following: That is to say, the lands to fall to the above named George and Thomas and their heirs forever, also the said cattle horses mares and colts with the future issue and increase of the females thereof, to be shared equally share & share alike.[2] His father wrote his Last Will and Testament on the 6th of April 1776. He left to George, son of Metawney (an Indian Woman), stock of cattle with his own, his sister Judith's and brother John's mark and brand. Also the old brick house, in S. C., land above the Spanish Cutoff on Savannah River in Georgia.[3] His father, George, died in December of 1780. In his Last Will and Testament, George left to John, son of Metawney, cattle with his own, his sister Judith's and brother George's mark. Also land upon Ogechee, in Georgia, called the Old Town.[4]

On 18th of July 1784, George and John Galphin, made a petition for land that was then being laid out in two western counties which that many years last past the Head men Warrior and other of the Creek nation made an absolute gift and grant to "Matawna", and Indian woman, and to the children born of her body of a tract of land on the south side of Great Ogeechee river, lying between the mouth of Williamsons Swamp and the mouth of Penn Creek and other boundaries thereon mentioned making in the whole ninety thousand acres which has been often solemnly ratified by Treaties and received the sanction of the Government of this State. In their petition they declared that they were the only legal surviving representatives of the said "Matawna".[5] The Georgia House of Assembly regarding the petition returned their opinion stating:

The said grant is null and can be of no validity or effect as the same is inconsistent with Law and good Policy. Notwithstanding in consideration of the Meritorious services done by Mr. Galphin the deceased father of the Petitioners it is agreed that a square tract of fifteen thousand acres of land in any part within the limits of the said tract be granted to them and their Heirs and that the Governor and Council be requested to grant a warrant for the same.

John Galphin was the Speaker of the Lower Creeks in 1789. According to author, Joshua Haynes, in 1793 he attacked and robbed several traders near St. Mary’s apparently because Georgians had confiscated some 40,000 acres of his Tory father’s estate.[6] The assertion of this author concerning his father was a Tory as well as his estate was confiscated is contradictory to the fact that his father was considered a "Rebel Superintendent of Indian Affairs" by the British Disqualifying Act of 1780, and no records show his lands were confiscated.

John Galphin now at the Rock landing in the state of Georgia bargained and sold unto George Galphin of the state of South Carolina five negroe slaves viz. one negroe fellow named Peter or Pumpkin with his wife Beck and her three children, Tiner, Sandy and Georgia on the 1st day of July 1789.[7] Historical records show "Rock Landing Garrison was one of the first forts on the Oconee River and a trading post in 1789."

Benjamin Hawkins sent a letter to John Galphin on the 20th Nov 1797 telling him to "proceed, without delay, to Fort Wilkinson, and there act as interpreter until I arrive, as you are required to attend the Commissioners of the U.S. on the line to be run between Georgia and the Creeks. In the latter case, you will attend as a Creek Commissioner, with the other Commissioners you will inform them that they are to be at the fort by the first of January, to go from the up the river to the head of Tulapocca….The Indians who go down will be troublesome when they have received, through the agents of their town, the amount of their orders…I know the Indians will teaze you to interpret for them; in all cases, give them decent answers, and whatever Colonel Gaither says is to them a law, and they must respect him as the Commander-in-chief. I must require of you to take care of your character, and you will be entitled to my friendly attention." [8] On the 6th day of January 1798, John Galphin was among five Creek Indian Commissioners who accompanied Coll. Hawkins at Fort Wilkinson on the South Side of the Oconee River for the purpose of running the temporary boundary line between the white inhabitants of the State of Georgia and the Creek Indians.[9] According to the accounts for payments for the commissioners marking the boundary line, John Galphin was paid several fees.

His brother, George, sister, and mother died before November 1798 based on a Power of Attorney given by "John Galphin of the Creek nation of Indians otherwise called John," to Captain John F. Webb dated the 10th of November 1798, to, among other things, make any contract for lands that John claimed as only surviving heir of my deceased mother, brother & sister on the waters of the Ogeechee river.[10] The document further revoked all former powers given by John or his brother George Galphin otherwise called George and myself.

The Quarterly payment of the Assistants and others in the Creek Department recorded on the 16th of October 1797, John Galphin was paid as express rider as well as on the 16th of May 1798 going express to Opiothly Mico. [8] The last entry in Benjamin Hawkin's letters was recorded on the 20th of January 1798 showing that John Galphin brought a letter from Colonel Hawkins. McGirt crossed, supplied him with bacon and paid him a dollar.[8]

The August Chronicle published a notice on the 15th of August 1807 from Thomas Galphin to a Mr. John Forsyth of Louisville, Georgia concerning a disputed conveyance by John Galphin to Mr. Forsyth in which Thomas Galphin wrote, "I will take the liberty of troubling the public, for the last time, by stating, that the Deed, under which I derive my claim to the Old Town Land, was executed by my father to certain trustees for the use of John Galphin during the term of his natural life, and to his lawful issue (not to his heirs and assigns, as you sir falsely say) in failure of such issue, the right of title devolves on me, my heirs and assigns; my claim consequently could only originate from the death of John Galphin which happened but a few years ago without marrying."[11] 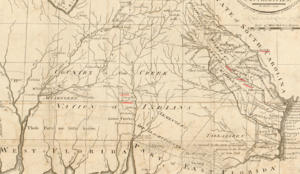