Born Michelle Ferdinande Pauline García, her name appears in various forms. When it is not simply "Pauline Viardot", it most commonly appears in association with her maiden name García or the unaccented form, Garcia. This name sometimes precedes Viardot and sometimes follows it. Sometimes the words are hyphenated; sometimes they are not. She achieved initial fame as "Pauline García"; the accent was dropped at some point, but exactly when is not clear. After her marriage, she referred to herself simply as "Mme Viardot".

She came from a musical family and took up music at a young age. She began performing as teenager and had a long and illustrious career as a star performer.

Opera Singer. A mezzo soprano, she is remembered as one of the 19th century's premier artists. Born Michelle Ferdinande Pauline Garcia to a distinguished Spanish operatic family, she was well-traveled as a child, becoming fluent in French, Spanish, English, and Italian by age six, then later adding Russian while attached to the St. Petersburg Opera from 1843 to 1846.

Her ambition was to become a concert pianist, and while her earliest musical training came from her singer father, she also studied with the great Franz Liszt and with Beethoven's friend Anton Reicha, teacher of both Liszt and Hector Berlioz.

Following her father's 1832 death, her mother, soprano Joaquina Sitchez, took-over her education and pushed her to become a singer.

Pauline's professional debut was as piano accompanist for her brother-in-law, violinist Charles Auguste de Beriot, and she was also to play for her older sister, the legendary contralto Maria Malibran.

After Maria's untimely death in 1836, she concentrated on singing, though she never gave up the piano, even playing duets with her friend Frederic Chopin and being allowed to re-arrange some of his compositions.

Pauline gave her first recital as a singer at Brussels in 1837 and made her 1839 operatic bow in London as Desdemona in Rossini's "Otello".

She married the much older operatic director Louis Viardot (1800-1883) on April 18, 1840 and was apparently happy and devoted to her husband and four children, though she was to have a string of romantic attachments for many years; the Russian novelist Ivan Turgenev lived in her home, while she was also linked to composers Berlioz and Charles Gounod. The creator of several roles including the title character of Charles Gounod's "Sapho" and Fides in Giacomo Meyerbeer's "Le prophete", she was probably best known for the title role of Gluck's "Orpheus et Eurydice", singing it about 150 times, the title lead of Rossini's "La Cenerentola" and Rosina in the same composer's "The Barber of Saville", as well as for both Zerlina and Donna Anna in Mozart's "Don Giovanni", all save the Gluck piece works with which her family has been closely associated.

A close friend of author George Sand and her lover Chopin, she was the model for the title character of Sand's 1843 novel "Consuelo", and was to sing a portion of Mozart's "Requiem" for Chopin's 1849 funeral. Camille Saint-Saens dedicated his "Samson and Delilah" to her and chose her to premiere the title role, though she declined the honor due to ill health.

Pauline retired in 1863 and had to live in Baden-Baden, Germany for a time due to her husband's political problems, but in 1870 Brahms was able to convince her to sing the world premiere of his "Alto Rhapsody" at Jena.

Returning to Paris in late 1870, she taught at the Paris Conservatoire while presiding over a noted music salon until her husband's death. Having purchased Mozart's original score for "Don Giovanni" in 1855, she exhibited it, then donated it to the Paris Conservatoire in 1892. In later years she returned to composition, having previously written numerous vocal and instrumental works which were considered by Liszt to represent "genius", and produced five small operas, the last, "Cendrillon", in 1904. Today, the Villa Viardot, a gift from Turgenev, is a venue for concerts and master classes.

Is Pauline your ancestor? Please don't go away!

ask our community of genealogists a question.
Sponsored Search by Ancestry.com
DNA
No known carriers of Pauline's ancestors' DNA have taken a DNA test. 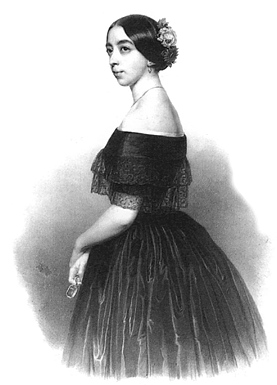