Thomas Gardner aka Gardiner
Born about 1592 in Sherborne, Dorset, England

NOTE: This profile is protected by the Puritan Great Migration Project, thank you for researching and updating this profile. Please contact the project through the comments prior to initiating any changes to the Data Fields and wait for a response before proceeding. Thanks.

Please see Edit Notes for current information regarding the status of this Profile. Deleted Sidney Gardner and Elizabeth White as parents. His parentage is unknown.

This profile is part of the Gardner Name Study.

He served as deputy for Salem to the General Court 26 Sep 1637 [MBCR 1:204]. He served on several juries in the 1640s and 1650s. He was also Salem selectman, constable, fenceviewer, highway surveyor, and rater in Salem.

"The wife of Thomas Gardner Sr" was fined for frequent absence from the public ordinances on Lord's days, along with a number of other Quakers, November Term 1660 [EQC 2:265]. This was merely the beginning of a long string of such fines and official harassment that eventually convinced several of the sons to move with their families away from Salem. Thomas Gardner Sr. is never named as having absented himself from public worship, and history is silent on his opinion on the matter."[3]

Anderson claims that all Thomas' children were by a first, unnamed wife, and NOT of Margaret:

"In the Salem land grant of 1637 Thomas Gardner received acreage for a household of seven. His sons Thomas and George were already old enough to receive grants of their own and be considered separate households. Seven younger children of Thomas Sr were still under age and presumably residing at home, which would make a household of eight. One or more of the children could have been serving in another family, but this accounting raises the possibility that Thomas did not have a wife living in 1637. This hypothesis is supported by the admission to church membership of a Margaret Gardner on 24 Mar 1639/40; had she been with Thomas Gardner since his arrival in New England, we would expect that he would appear in the list of church members compiled in late 1636 at the reorganization of the church. Consequently, we propose that Thomas Gardner had three wives, the first of them of unknown name, who died at the birth of the youngest child Seeth, whose baptism is one of the first recorded in late 1636.[3]

The article Thomas Gardiner of Salem [3] shows information found in 2014 that may explain that Margaret Friar was the first wife of Thomas Gardner and the mother of all of his children, and that he only had one other wife, Demaris ____ (widow Shattock). Pending further information from the Thomas Gardner Society, all of Thomas' children will be left attached to Margaret, not to an unknown first wife, which was the conclusion of Robert Charles Anderson in "The Great Migration Begins" page 735. The Thomas Gardner of Salem article indicates that Margaret's parents were Walter Friar and Grace Mullins and also states "...there is a record that may show Thomas' parents: Thomas Gardner and Christine Saule."

There is no documented proof of his origins or parentage, including no proof that he was the son of Thomas Gardner and Elizabeth White.

"Banks states without authority that Gardner might have come from Hurst, Martock parish, Somersetshire [Topo Dict 143], and other origins have been claimed. An origin in the West County is certain, but the name is common and none of the suggestions made to date has a firm foundation.
"George McCracken suggested that the unusual name of the Gardner's last child, Seeth, was an indication that in previous generations there had been a marriage to someone with that surname [TAG 30:157]

More recent research[5] has discovered the marriage of Thomas Gardiner and Margaret Frier on April 28, 1617 in Sherborne, Dorset, followed by baptisms of sons Thomas and George-- known to be the two oldest sons of the later Salem couple. There is a 1591 Sherborne baptism of a Thomas Gardiner that would fit this Thomas and a 1598 baptism of Margaret Frier; unfortunately neither baptism lists the parents. That said, there is a Sherborne marriage record for a Walter Frier and Grace Mullins on 31 Jan 1591, a reasonable timeframe to be Margaret's parents.[6]Image linked to Margaret's profile and available at Family History Centers on-site[7]

Question: Can we confirm that this Sherborne family (Thomas and Margaret with sons Thomas and George) disappear from Sherborne records after 1624, known migration year of the Salem, Massachusetts family?

For images related to Sherborn, Dorset, see the Profile of Margaret Friar or Sherborne focus at Gardner Research.

... Note: these moved to a G2G: Edit notes: specific to updates for profile of Thomas Gardner

Again, Edit Notes will disappear once this Profile is sufficiently structured to meet the requirements set by WikiTree. 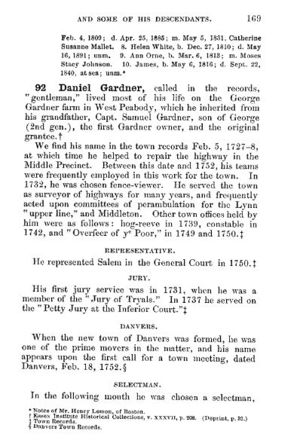 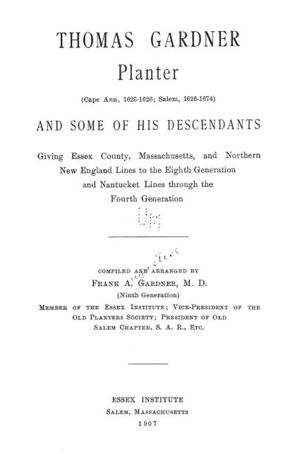 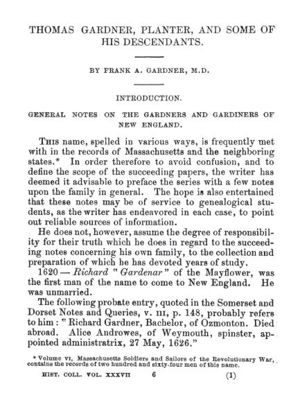 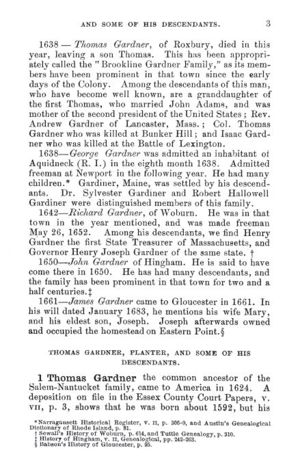 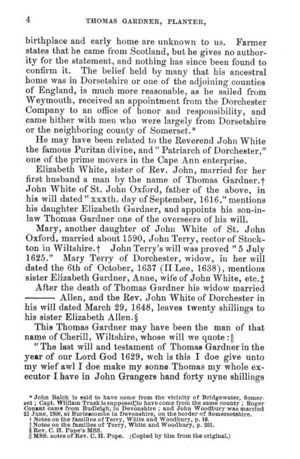 Leave a message for others who see this profile.
There are no comments yet.
Login to post a comment.
M Cole
FindAGrave lists a specific birth date has a specific baptism date of 30 Oct 1592 with an image of the parish register. Does someone want to take a look?

John M. Switlik
Thank you for the notice about the edits at FindAGrave. This brings up the opportunity to point to what's being done with Thomas' Profile. We have been discussing these changes since 2014 when the records were first noticed to have been digitized. Also, someone changed 1591 to 1592 for October. The following two months still have 1591.

With regard to coordinating edits, there is a project on-going. See https://www.wikitree.com/g2g/1144201/edit-notes-specific-to-updates-for-profile-of-thomas-gardner.

With regard to general issues, see this G2G. I moved the comment about the burial site's disposition over there. https://www.wikitree.com/g2g/1129086/coordinating-coming-edits-the-thomas-gardner-gardner-page

John M. Switlik
The images are under Margaret's Profile. https://www.wikitree.com/wiki/Fryer-892 Why? Because Thomas' is such a mess. We are working to clean it up.

There were 'Edit notes' which referenced these images: https://thomasgardnersociety.org/html/Research/Sherborne.html#images These notes are now at this G2G: https://www.wikitree.com/g2g/1144201/edit-notes-specific-to-updates-for-profile-of-thomas-gardner.

The approach was going to be to clean it up (remove most of these images) and then use Anderson's book as the basis with changes/notes based upon later research.

So, is this our Thomas and Margaret? Needs careful consideration. One person mentioned doing something for the NEHGR. Want to help with that?

Note: Edit notes on this Profile point to Margaret's Profile or Gardner Research wrt to images from Sherborne records.

S (Hill) Willson
For specific first steps suggested for updating this profile, interested parties please see this g2g post as well as the one that Cheryl posted below: https://www.wikitree.com/g2g/1144201/edit-notes-specific-to-updates-for-profile-of-thomas-gardner
posted Nov 26, 2020 by S (Hill) Willson

Cheryl (Aldrich) Skordahl
profile managers and others interested in this profile, please see g2g for particulars on this profile and to volunteer to improve it.

John M. Switlik
Pending change. I would like to see us remove those images from Frank's book. There are good copies on-line (Google docs, archive.org, and Hathi Trust) which can be referenced here. Now, if the NEHGS would be so kind as to allow us to point to Anderson's book (... wish list ...).

Would not removing those images improve the look of the Profile? Also, if this is not an appropriate place for such a comment, please let me know.

Brad Stauf
John, I'll add my 2 cents. I agree that when you can link to an off-site image like archive.org etc, there is no need to put up a local image and that's the way I do it on my family tree. The ones like parish registers that are not available to be linked is what I think are worthwhile. Respecting the need to attribute, obey copyright usage etc (which, yes, I've been scolded for previously).
posted Oct 14, 2020 by Brad Stauf

Brad Stauf
I added the source for the 1591 Sherborne marriage of Walter Frier and Grace Mullins...and then realized that somebody did all this work on Margaret's profile, an image of the marriage is already there as well as an image of the marriage of this Thomas and Margaret. Oh well, it can't hurt to have the links here I suppose. I'll add a link to that latter marriage image on this profile as well.
posted Oct 13, 2020 by Brad Stauf
edited Oct 13, 2020 by Brad Stauf

Jillaine Smith
Regarding the edit notes: could whoever added them please add a date so we know when they were added? Thanks.
posted Oct 12, 2020 by Jillaine Smith

John M. Switlik
Was off with other duties. Time to get back to this.

Anonymous (Angel) Macy-Angell
I have Thomas, St as my 9th great-grandfather. Luckily for me this came with new information when I merged John Macy and Deborah Gardner [daughter of Richard Gardner] with another member's information. I will read everything thoroughly. All dates don't match what I have from my research but I rather think I should trust what you have because a lot of mine came from ancestry.co.uk... I never take some of their information at their say-so anyway. Only if I can see the original church parish records, etc will I use it. Thank you for what looks like a very thorough job! Much better than mine, I assure you!
posted Mar 25, 2020 by Anonymous (Angel) Macy-Angell

John M. Switlik
Jillaine Smith. Yes. I will start a G2G related to the effort. Appreciate the opportunity to summarize what we (might) know as plenty of researchers have touched upon the subject.

For me, the work will be dedicated to first cousin Frank (MD and author) who got this started.

Caveat: My focus is advanced computational support for modern processes which include research. I am using an embed, improve method which can be effective. Actually, the 'wiki' approach was one of the chief attributes that made WikiTree so appealing to me. I will push this up my priority queue for the next few weeks.

Jillaine Smith
John Switlik, you seem closest to the most research done on this family. Would you be willing to update this profile based on that research? It includes changing the parents currently linked.
posted Oct 18, 2019 by Jillaine Smith
Isaac Taylor
Are we confident in the birthplace we are currently publishing?
posted Oct 18, 2019 by Isaac Taylor
Joe Cochoit
John, I have been reviewing the evidence given and I think the evidence is very good to establish the English origins of Thomas Gardner. The correct name of his wife Margaret, and the correct names of his sons baptized in the correct order is conclusive. Frankly, this should be published in the NEHGR.

This also says that Anderson's theory that there was an unknown first wife is incorrect I am frankly surprised at Anderson's supposition based on differing dates of admittance to the church - this was in fact extremely common.

New view, lots of new research opportunities: The remains of Thomas? We do not know.

His stone was moved to Harmony Grove. Grandson Abel, son of son Samuel (ancestor), and his wife were of those whose stones were moved, as well.

It is unclear how many gravestone were moved, whose bodies may have been re-interned, or just how many graves were left to be scraped by the road work or to be covered over by the progress of building. More research is to be done. Dr. Frank talked to George Augustus Gardner about, and read the, notes that George had that had been written by Samuel Pickering Gardner (see Gardner Memorial - page 17).

John M. Switlik
Frank A. Gardner, M.D., author of the Gardner books, editor of The Massachusetts Magazine, and more.

We have both his paternal and maternal tree filled in (profile focus) and are working on editing for format (sources, et al) plus completeness.

His maternal tree was accomplished by using his personal notes (ca 1907).

Original note that precipitated discussion about the records (which I just verified that I have, on our server).

Right now, I point to his Gardner tree via an ahnentafel (sourced) on the profile. I have his handwritten lineage for his mother which I will be adding in the next week.