Thomas Gardner, son of Thomas Gardner of Roxbury, was born in England. His birth year is a guess based on his marriage to Lucy Smith on Jul. 4, 1641 in Roxbury. They had the following children; Andrew, Thomas, Abigail, Mary, Peter, Abigail (2nd), Lucy, Joanna, Joshua and Caleb. Thomas resided in Roxbury. He died on Jul. 15, 1689 in Brookline, although his death was recorded in Roxbury. His wife Lucy died on Nov. 6, 1687.[1]

Thomas became a member of the Roxbury Church in 1650 and paid an annual tax of thirteen shillings for the support of a Roxbury school as no school was kept then in Muddy River.[3]

In 1672 when the people of Roxbury decided to build "a nue Metting-hous," and permit the people of "Mudi-river" to share in its privileges if they would bear one fifth of the expense, the list of Brookline taxpayers for this object was headed by Thomas Gardner, who paid ten pounds, that being the largest amount paid by any man in the place. The amount raised was 104 pounds, 13 shillings. His brother Andrew paid 5 pounds.[4][5]

Thomas Gardner died in 1689 in Brookline, however his death is recorded in the Vital Records of Roxbury. He left a will providing for his sons Thomas and Joshua, and his four daughters who survived. His daughter Mary had married Thomas Boylston, one of the earliest of an old Brookline family.[6]

Extracted from Vital Records of Roxbury to 1849 -- mother's name not always provided.

Thomas is an ancestor of two US Presidents, John Adams and John Quincy Adams, and the ancestor of US Vice President Charles Dawes. 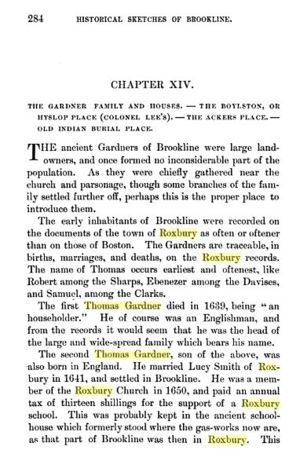 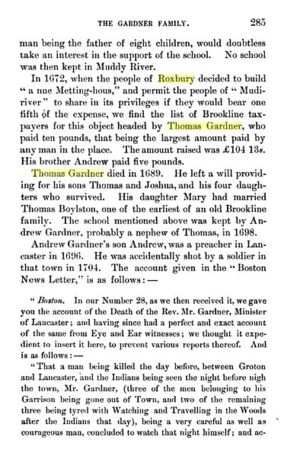 Leave a message for others who see this profile.
There are no comments yet.
Login to post a comment.
Bill Oliver
Which President/Vice-President is Thomas a direct ancestor of? The "degrees" section below is difficult to follow on any profile.
posted Jun 28, 2021 by Bill Oliver

Robin Lee
I have added the connections under a heading called "Legacy" Thanks for helping to improve WikiTree.
posted Jun 28, 2021 by Robin Lee