Father of Caleb Gardner, Isaac Gardner Sr., Benjamin Gardner and Richard Gardner
Died about 1724 at about age 78 in Brookline, Massachusetts

Correct naming of the Thomas Gardner line is as follows:

This Thomas is NOT an ancestor of John Adams.

Thomas Gardner his father and Lucy Smith his mother are direct ancestors to President John Adams.

The President Project had this Thomas as John Adams direct ancestor until I corrected it.

Ezra Stiles information on this family is mostly incorrect. Many other sources exist. Further reading will clear any confusion such as it exists currently on WikiTree.

Often referred to as "Deacon," Thomas Gardner, son of Thomas, married Mary Bowles on Nov. 17, 1673 and had the following children; Sarah, Thomas, Mary, John, Caleb, Peter, Isaac, Richard, Solomon and Benjamin. Thomas resided in Roxbury but removed to Brookline. Some sources say he died there in 1725.[1]

Thomas Gardner's name is one of the first on the petition for a separation of Brookline from Boston. He was evidently a man of property and much influence.

In 1718, Thomas built a home that was successively owned by his three sons, Solomon, Caleb and Benjamin. It stood at the curve of the old Sherburne road and once had only green fields and thick woods lying about it with the only other house in sight being that of Nathaniel Gardner. For a description of his home, where a secret room was discovered containing an ancient sword, see Woods, Harriet F. Historical Sketches of Brookline, Mass. Boston. 1874; page 291. Another surprise was a cannon ball, imbedded between the chimney and the beams that was discovered during some alterations done after a century had passed, (see page 292.) 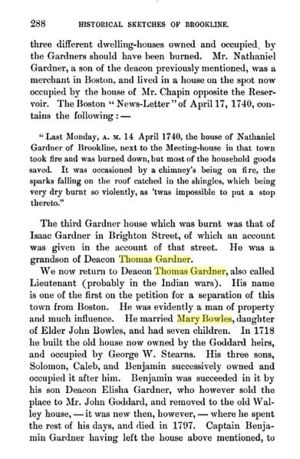 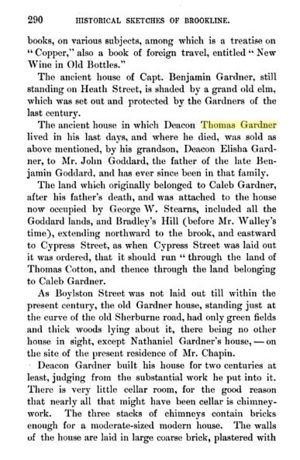 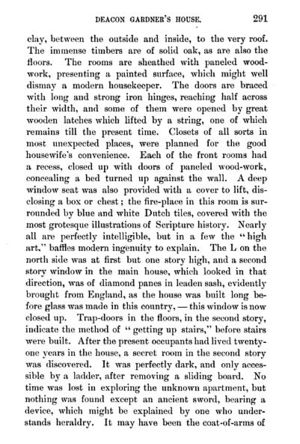 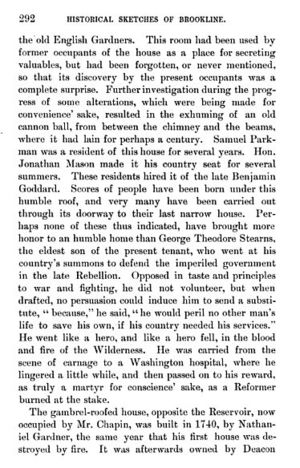