Josephine Garis was a daughter of John Garis and Irene Fitch, born in Ashtabula County, Ohio, USA on 8 March 1841.[1] Her father was a native of Pennsylvania and her mother was born in Ohio.[2]

1880 At the 1880 US Census Josephine and family were living in Shelbyville, Shelby County, Illinois, USA. William worked as a circuit clerk.

1900 On the 1900 US Census, Josephine is listed as a manufacturer of washing machines. Her sister Minnie taught music. They resided in Chicago, Illinois, USA.

1910 Josephine and Minnie were still living in Chicago, Illinois in 1910.

Josephine Cochrane (March 8, 1841, Ashtabula County, Ohio - August 3, 1913) made the first practical mechanical dishwasher in 1886, in Shelbyville, Illinois., although a washing machine device was patented in 1850 by Joel Houghton (see Dishwasher, History). Mrs. Cochrane was a rich woman who held many fancy dinner parties. She did not do any of the dishes herself because she had servants to do that for her, but she wanted a machine that could do the job faster without chipping any dishes. No one had invented such a machine so she built one herself. She has always dreamed of being famous. She is said to have exclaimed, "If nobody else is going to invent a dishwashing machine, I'll do it myself!" First she measured the dishes. Then she built wire compartments, each specially designed to fit either plates, cups, or saucers. The compartments were placed inside a wheel that lay flat inside a copper boiler. A motor turned the wheel while hot soapy water squirted up from the bottom of the boiler and rained down on the dishes. Her friends were very impressed and had her make dishwashing machines for them, calling them the "Cochrane Dishwasher". Her friends talked a lot about their new machines and soon, Mrs. Cochrane was getting orders for her dishwashing machine from restaurants and hotels in Illinois. She patented her design and went into production. She showed her invention at the 1893 World's Columbian Exposition in Chicago and won the highest prize for "best mechanical construction, durability and adaptation to its line of work". She started the Garis-Cochran Manufacturing Company, which became part of KitchenAid, which became part of Whirlpool. She died in Chicago in 1917.

She developed the first practical mechanical dishwashing machine in 1886. She found after a major dinner party she often gave, there were countless dishes to be cleaned. She wanted something that could quickly clean and not break the dishes. She designed a machine especially with small compartments for the different cups and sized dishes. Those compartments were inside a wheel which was a copper boiler. A motor turned the wheel with hot soapy water coming up from the bottom of the boiler and then down on the dishes.

Her friends soon requested a similar machine which was called "Cochran Dishwasher". Josephine received a patent for the machine and started full manufacturing of the dishwashing machine under the name Cochran's Crescent Washing Machine Company. The company eventually became Kitchen Aid Company.

Is Josephine your ancestor? Please don't go away!

ask our community of genealogists a question.
Sponsored Search by Ancestry.com
DNA Connections
It may be possible to confirm family relationships with Josephine by comparing test results with other carriers of her ancestors' mitochondrial DNA. Mitochondrial DNA test-takers in the direct maternal line: 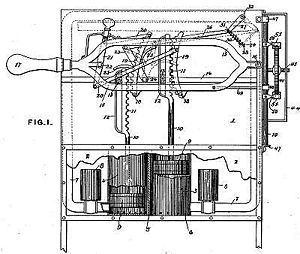 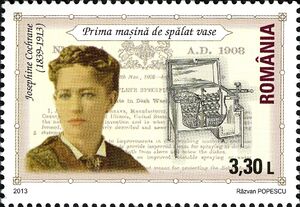