Henry Highland Garnet was an African-American abolitionist, minister, educator, and orator. He and his family escaped to New York from slavery in Maryland, in the early 1820's. [1] [2]

Henry's paternal grandfather, known as Joseph Trusty, is said to be a member of the West African Mandigo tribe, captured, transported and sold to Colonel William Spencer of Maryland. Joseph Trusty's wife, who had crossed the ocean from the African continent to America on the same slaveship, is most probably Henry's grandmother. [1] [2]

When Henry was about 8 years old, Colonel Spencer, who was still slaveholder of the Trusty family, died. Fearing they would be inherited by a cruel owner, Henry's mother (described as "a woman of great energy") and father conceived a plan to escape. In all, eleven members of the Trusty family fled to Wilmington, Delaware with the help of the Underground Railroad. [4] Indeed Maryland court records confirm that "all the negroes belonging to the estate of William Spencer, appraised at $1200, absconded soon after his death, and were finally lost, though legal measures were taken to recover them, by his executor, Isaac..." [5]

Henry's family later moved to New Hope, Pennsylvania, and then to New York. His father George was a shoemaker. [1] [2] It is unknown at this time when the surname Garnet was first adopted in the "Trusty" family.

Henry Garnet was one of a handful of black students educated at the Noyes Academy in Canaan, New Hampshire around 1835. During his studies an armed racist mob gathered to attack the school. It is said that he fended them off with rifle fire, and that he met his wife Julia Williams on that day. [1] Henry and Julia had three children: Mary, James and Henry. [6] [7]

Is it possible the name Garnet was taken in honor of Thomas Garrett , a leader of the Underground Railroad who had helped the Trusty family?

Biography needs work on Henry's career, the loss of his first wife, his second marriage, his move to Liberia. 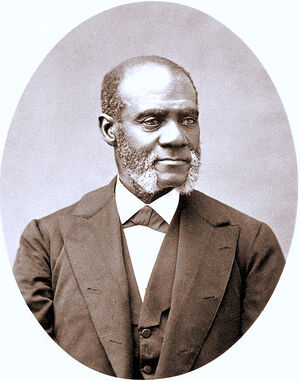 C Ryder
Why does Wikipedia name Garnet's wife as Julia Williams? (married in 1841).

Sarah (Murtaugh) Heiney
Julia Williams was his first wife and she will need a profile created. Sarah was his second wife, whom he married after Julia's death and shortly before his own. It's mentioned in the "Later Life" section on his Wikipedia article in this line: "His first wife Julia died. In 1879, Garnet married Sarah Smith Tompkins, who was a New York teacher and school principal, suffragist, and community organizer." Not exactly well-written, and by Wikipedia standards he should almost certainly have a section for Personal Life with both marriages described rather than the odd formatting it currently has (October 2020); I might have a look at improving his Wikipedia article myself in the near future.
posted Oct 20, 2020 by Sarah (Murtaugh) Heiney

C Ryder
Sarah, I got carried away and entered text based on obituaries found in newspapers. Apologies if that doesn't suit you. :) Yes the Wikipedia page needs work.
posted Oct 21, 2020 by C Ryder