Internationally renowned French singer-songwriter, cabaret performer and film actress, Edith Piaf is considered to be France's national chanteuse, and one of the country's most-recognized international stars.[1] She was born as Edith Giovanna Gassion on 19 December 1915 at Tenon hospital (5, rue de la Chine) in the 20th arrondissement of Paris, to Annetta (Maillard) Gassion, a cabaret singer, and Louis-Alphonse Gassion, an acrobat and cabaret performer. Her parents' address was at 72 rue de Belleville.[2]

Edith's mother left her to the care of her own mother, Emma Saïd Ben Mohammed, a cabaret singer, in Paris. When Edith's father enlisted in the French Army in 1916, he took her to his mother, Léontine Louise Descamps (1860–1937), known as Maman Tine, who ran a brothel in Bernay, Normandie. There, the half-dozen local prostitutes helped look after the baby. At about 3 years old, little Edith's eyesight failed, a result of an untended keratitis or pink-eye infection. She was virtually blind for nearly 4 years until her grandmother and her "girls" took the child to the nearby shrine of Sainte Thérèse de Lisieux, where she was "miraculously cured" in about 1922. Perhaps the nuns also prescribed better eye hygiene...

Edith returned to Paris shortly thereafter, passed on to a disinterested aunt. Her education was non-existent and her childhood was spend in poverty and squalor in the poor Belleville section of Paris. As a child she earned a pittance by begging in the streets of Montmartre, where she sometimes also slept. In 1929, at 14 years old, her father added her to his acrobatic circus performance act and they traveled the French countryside together. She began singing in public and soon impressed audiences with her unique & mature musical sound.

The following year, back in Paris, she met Simone "Mômone" Berteaut, thought to be her half-sister, who became her close companion for many years. They had a duo singing and cabaret act in Paris' Pigalle (Red Light) district and lived together in a small, rented hotel room. It was there, in 1932, that Piaf conceived a love child, Marcelle Gassion, with Louis Dupont, an ardent admirer, who tried to take her away from the streets & bui-bui cabaret life. He failed and her only child, born in February 1933, died two years later.

In 1935, she was noticed by nightclub owner Louis Leplée, whose club, Le Gerny's, located near the Champs-Élysées, was popular with an upscale Parisian crowd. He put her to work singing regularly in his club, christening her with the nickname La Môme Piaf (French for "Little Sparrow"), which became her sobriquet for life . Her nightclub gigs led to her first two records, both produced in 1935. One record featured lyricist Marguerite Monnot, whose songs about hard times struck a popular chord. She remained one of Edith's favorite song-writers.

Unfortunately, some of Edith's Pigalle low-life connections held a grudge against Louis, in part for taking the instantly-popular "little sparrow" from her nest in Pigalle (where she was making them money). On 6 April 1936, Louis Leplée was murdered and Piaf was initially accused of being an accessory but she was acquitted of any wrong-doing. She hired Raymond Asso, a lyricist who became her lover, and he and Marguerite Monnot created a series of popular songs highlighting Edith's difficult "life on the streets" that became her credo.

World War II broke out and German troops occupied Paris. Piaf was in high demand, especially after artist and friend, Jean Cocteau, starred her in his one-act play, Le Bel Indifferent (1940). She sang with Maurice Chevalier and had a publicized love-affair with rising singing star, Yves Montand. Although accused of wartime Collaboration in 1945, she escaped post-war condemnation.

Edith Piaf became an international celebrity and renowned musical star in the post-war era. She toured Europe, the USA and South America, notably Argentina. Although her simple black-dress, solo spotlight, singing act was not in keeping with Hollywood's musical extravaganzas, she caught the eye of New York critic, Virgil Thompson, whose approval opened Television's Ed Sullivan show to her and helped her win 2 appearances at Carnegie Hall in 1956-1957.

Edith Piaf married twice, first on 20 September 1952 in New York City, to French singer Jacques Pills. The marriage ended in divorce in 1957.[3] Her second marriage was to Theophanis Samboukas, known as Théo Sarapo, a Greek-born actor and singer. They were married on 9 October 1952 in the 16th arrondissement of Paris[4]

In France she helped Charles Aznavour launch his glittering career and scored half-a-dozen sold-out, recorded, appearances at Paris' Olympia Theater, from 1955 right up until her nonstop performances, at least 2 near-fatal automobile crashes, with resultant addictions to alcohol and pain-killers, led to liver failure, causing her death of an aneurysm in her villa in Plascassier, a district of Grasse, on the French Riviera, on the evening of 10 October 1963.

Edith Piaf was just 47 years old when she passed, leaving France heart-broken. Her body was clandestinely - and illegally - driven bach to Paris in the night, and registered thanks to a postdated certificate made by her doctor.[5] Her life-long friend, Jean Cocteau, died 7 hours later on 11 October 1963.

Denied a national funeral at Notre Dame Cathedral by the Archbishop of Paris, due to her promiscuous lifestyle, many lovers, and divorce, she was laid to rest in Père Lachaise cemetery in Paris, where some 100,000 bereaved fans mobbed her tomb as she was buried. [6] She is buried next to her daughter, Marcelle, and her father and 2nd husband are also buried in her tomb at Père Lachaise in Paris. Famille Gassion-Piaf is the name engraved on the foot of her tombstone. On its side is engraved: Madame Lamboukas, dite Édith Piaf.

Is Edith your ancestor? Please don't go away!

ask our community of genealogists a question.
Sponsored Search by Ancestry.com
DNA
No known carriers of Edith's DNA have taken a DNA test. 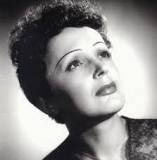