married during the year 1824

Note: This 1894 Census indicates Elizabeth has had 11 children with 10 still living.

1861 census - LUTHERAN and living in WELLESLEY: Likely attended ST. PAUL’S LUTHERAN CHURCH. This church may have records for the death of Christian and Maria. And may be found at the Waterloo County archives. 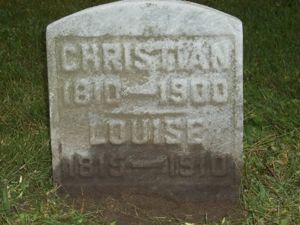 After immigrating from Prussia, Christian and his family first lived in the village of Wellesley in Waterloo County, Ontario, Canada. A couple of his older children married and stayed in Canada, and the rest of children moved to Michigan around 1869.