"The Gatke Resort, a three story hotel, was built by Charles Gatke and sons of Ludington in 1895. The name was later changed to the Sauble Inn. The Inn attracted many Chicago vacationers. There was a covered stop at the bottom of the hill on the lake front for the Dummy Train. The large Inn with its veranda was up a wooden flight of stairs. There were tennis courts, a Log House for dances and games, a ball diamond, enclosed swimming area with a dock and slide into the water. The hotel burned in 1941 and was replaced with cottages today called Sauble Resort."

The Ludington Daily News for Thursday March 10, 1898 reported the following:

"C. T. Gatke is about to make extensive repairs and improvements about his Hamlin lake resort. Mr. Gatke anticipates a large patronage this summer."

This census shows Charle's wife's parents and family living in the next house.

In this census, Charles' occupation is Carpenter and Joiner and his son, Charles is listed as working with his father.

This Census shows that Charles and Mary had been married for 33 years, making their estimated marriage year 1867, that Mary was the mother of 12 children with 7 living, and that Charles and Mary, and the parents of each, were born in Germany. Charles' and Mary's immigration were recorded as 1858 and 1856 respectively. Charles occupation was listed as Hotel Keeper.

The widowed Mary C. GATHE is found living with her daughter's family. 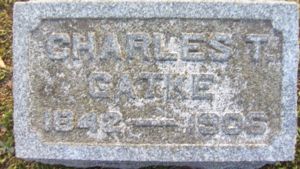