NOTICE: this profile is protected by the Acadian Project because of frequent duplication, and she is an historically important person - matriarch of Acadian Aucoin family. Please contact the Acadian Project before making any substantive changes. Thanks for helping make WikiTree the best site for accurate information.

Marie Gaudet is the ancestral matriarch of one of the branches of the Acadian Aucoin family.

Marie was born around 1657 to parents Denis Gaudet and Martine Gauthier.[1] Marie’s name appears for the first time in Acadian records in the 1671 census at age 14, living with her parents and siblings at Port-Royal.[2]

In 1704, the family may have been affected by the raid on Grand-Pré. Benjamin Church arrived on the frigate Adventure proclaiming that settlers should surrender within the hour. He was thwarted by the tides, which prevented access to settlements along the narrow brooks but made them targets for Acadians and Mi’kmaq on shore. Some of the inhabitants had time to escape to the woods with their valuables. Then Church’s men start pillaging; two of his men were killed during a skirmish with the villagers. Grand-Pré was set on fire and the dykes were damaged.[8]

The after-effects of the raid were fairly mild. Slaughtered animals were eventually replaced and homes and dykes repaired. However, a drought the previous year and the loss of crops from the raid created a shortage of flour for 1704-05.[8]

After Martin passed away in 1711, Marie lived at Rivière-aux-Canards with two of her sons as shown in the 1714 census.[9]

Marie died at St Joseph de Rivière-aux-Canards according to the depositions of her descendants at Belle-Île-en-Mer, at an unknown date. Some family trees give 2 May 1734 as the date of death. There is no proof of this claim. We only know that she passed away after the 1714 census. [1]

DNA. Marie Gaudet's mother was Martine Gauthier. The Mothers of Acadia Maternal DNA project is conducting ongoing research to verify their origins. In 2010, Stephen White reported that Martine Gauthier had a J1b1 haplogroup. I don't know the details re how many of her descendants were tested to support this report. Lucie Leblanc Constantino describes one maternal tree here. Ongoing test results are also reported here. As of May 2014, 2 of 2 descendants have reported a J haplogroup, indicating European origins. 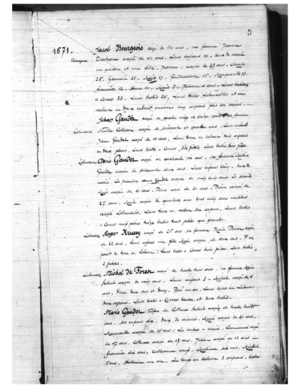