John jack Gaulding was born abt. 1785 in Prince Edward County, Virginia. He is a possible son of Archibald Gaulding, according to Bill Gaulden of Kansas.

John "Jack" Gaulding died about 1845 of yellow fever in Mobile, Alabama.[9] Further research into his death is needed to find a source for Bill Gaulden's assertion.

Here is a list of the Yellow Fever outbreaks in the Mobile area of Alabama in the years around the suggested death date for John Jack Gaulding:

Archibald[11] (see below) and ... Detached Profile: This profile had been attached as son of Archibald Gaulding (son of Samuel). A comment on Archibald's profile by Liz Shifflett explains:

Is it just me? I don't see any evidence that John, father of James W Gaulding, is son of Archibald.

Best I can determine from the sources given in the profile [[[Gaulding-95]]] that I have access to is that this Archibald is the son mentioned in Samuel's will. Nothing to indicate John is his son. From this page:

"Gaulden/Gaulding, Archibald: srvd as a PVT in the 5th VA Rgt.--- I bet this is William Turner Gaulding's brother. This is all that I have ever found on him. (according to Linda Lepow)"

In exploring the information in the links given, I think it more likely that James Gaulding-17 is a descendant of the branch of the Gauldings with Alexanders - James's grandson, second son of daughter Lula, was named Alexander.[12]

Estimated birth year: About 1785 is based on the will of his grandfather, Samuel Gaulding:

He is listed by Bill Gaulden as being born in Prince Edward County, Virginia.

Wives: The obituary of James W. Gaulding (b 1821 in Hancock County, Georgia) names him as the youngest child of John and Martha Gaulding, of Virginia.[13] A record of marriage between a John Gaulding and Martha Gaulding in Prince Edward County, Virginia is for 14 April 1808.[14] A list of John's children includes at least two born before 1808.[9]

Wife Martha: Whether or not the Martha, mother of James,[13] was Gaulding-18, it does not appear that she could have been the mother of all of John's children, as more than one listed by researcher Bill Gaulding[9] is born 1800, before Martha, daughter of Jesse and Elizabeth Barnett Gaulding, Married John Jack Gaulding in 1808.

Martha was born in 1785, in Prince Edward County, Virginia where her parents Jesse Gaulding and Betty Barnett lived, and where she married her cousin John Gaulding on 14 April 1808. She died after 1870 in Troup County, Georgia.[9][16]

ask our community of genealogists a question.
Sponsored Search by Ancestry.com
DNA Connections
It may be possible to confirm family relationships with Jack by comparing test results with other carriers of his Y-chromosome or his mother's mitochondrial DNA. However, there are no known yDNA or mtDNA test-takers in his direct paternal or maternal line. It is likely that these autosomal DNA test-takers will share some percentage (beta) of DNA with Jack: 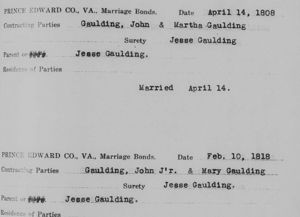 Liz (Noland) Shifflett
James W. Gaulding's obituary says he was the youngest son of John and Martha Gaulding of Virginia.