Carl Friedrich Gauss was born on 30 April 1777 in Brunswick (Braunschweig), in the Duchy of Brunswick-Wolfenbüttel (now part of Lower Saxony, Germany), as the son of poor working-class parents. His mother was illiterate and never recorded the date of his birth, remembering only that he had been born on a Wednesday, eight days before the Feast of the Ascension, which itself occurs 39 days after Easter.

Gauss's personal life was overshadowed by the early death of his first wife, Johanna Osthoff, in 1809, soon followed by the death of one child, Louis. Gauss plunged into a depression from which he never fully recovered. He married again, on 4 August 1810, to Johanna's best friend, Friederica Wilhelmine Waldeck, commonly known as Minna. When his second wife died in 1831 after a long illness, one of his daughters, Therese, took over the household and cared for Gauss for the rest of his life. His mother lived in his house from 1817 until her death in 1839.

With Minna Waldeck he had three children:

Gauss died in Göttingen, in the Kingdom of Hanover (now part of Lower Saxony, Germany) on 23 February 1855 and is interred in the Albanifriedhof cemetery there.[1] 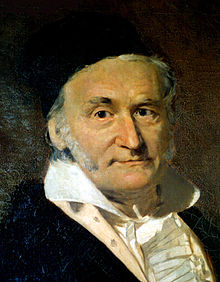 Jeff Bronks
Now connected to the global tree through his son Eugene and his American descendants
posted Oct 28, 2017 by Jeff Bronks