Piers was a younger son of the Gascon knight Arnaud de Gabaston and his wife, Claramonde de Marsan. He was born at Béarn, Gascony, about 1284. With wife, Margaret de Clare, he had another daughter, Joan, who died ca age 13. He became a favorite of King Edward II and was created Earl of Cornwall.

Piers first appears in the records in 1297, when he served in the army of Edward I in Flanders, following which he became a yeoman in the king's household. He served in Scotland in 1300, as did his father and brother.

He was beheaded without trial sometime before 19 June 1312. His body was removed by the Dominican friars to Oxford, where it remained for over two years until Edward II had it taken to Kings Langley, where Gaveston's remains were finally laid to rest on 2 January 1315 in the Dominican house there.

Knt., Earl of Cornwall, Lord of the Isle of Wight, Baron of Wallingford, Berkshire, Trematon and Launceston, Cornwall, Beckley, Oxfordshire, and Burstwick and Knaresborough, Yorkshire.

He was granted the barony of Beckley, without the manor of Beckley, in 1309. After his death it returned to the crown.[1]

Is Piers your ancestor? Please don't go away!

ask our community of genealogists a question.
Sponsored Search by Ancestry.com
DNA
No known carriers of Piers's DNA have taken a DNA test. 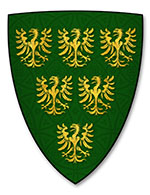 Piers is 22 degrees from Donald Howard, 18 degrees from Julia Howe and 9 degrees from Henry VIII of England on our single family tree. Login to find your connection.