Wife of John Cottrell — married after 1676 in Westerly, Rhode Island

Mother of Jeremiah Crandall and Eber Crandall
Died about 1678 at about age 30 in Westerly, Washington County, Rhode Island

She married after 1670 to John Crandall and they had two children, as follows:[1]

John Crandall died in 1676 and Hannah married, as her second husband, John Cottrell of Westerly.[1] John came to own land in 1680 that belonged to Rev. John Crandall, and it is thought that it might be because his wife was a Crandall.[2]

Hannah died about 1678 at Westerly, Rhode Island, where she is likely buried.

ask our community of genealogists a question.
Sponsored Search by Ancestry.com
DNA Connections
It may be possible to confirm family relationships with Hannah by comparing test results with other carriers of her mitochondrial DNA. However, there are no known mtDNA test-takers in her direct maternal line. It is likely that these autosomal DNA test-takers will share some percentage of DNA with Hannah: 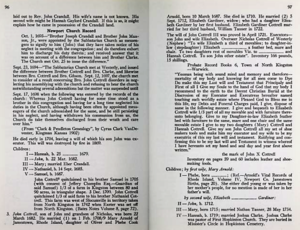