Henry Louis Gehrig was the son of Heinrich (Henry) and Christina Facke (or Fack or Foch) Gehrig, German immigrants living in the Yorkville section of Manhattan.[2][3] He was born in New York City June 19, 1903. [3][4][5][6] Lou was the only Gehrig child to survive to adulthood.[5] Lou's father wasn't the kind of guy one would look up to with frequent tardiness and drinking issues, but his mother worked hard to support the family, and was very protective of her only surviving child.[5]

When the Gehrigs moved to Washington Heights, within walking distance of two different baseball stadiums, Lou's love of baseball was ignited.[5] He started playing with local boys, and soon emerged as the best player in the neighborhood.[5] Unfortunately, Lou's mother wasn't sure about the hobby and instead pushed him to focus on his schooling.[5] Lou followed his mother's advice, and did well in school, but still managed to squeeze in time for baseball.[5]

Lou attended Commerce High School in Manhattan, and was a star on both the baseball and football teams.[5] It was playing for Commerce that sent him to the national spotlight, when he hit a grand slam in what would later be named Wrigley Field, playing the Chicago city champion team.[5] Upon graduating from Commerce, Lou enrolled at Columbia University with a football scholarship.[5] Before he started, though, he was recruited by the New York Giants to try out.[5] His tryout didn't go as planned, though, and he spent some time on the Hartford Senators instead.[5] Not realizing play for pay could jeopardize his college career, he nearly lost his spot on Columbia's baseball team.[5] The coach coaxed opponent teams to believe it was an innocent mistake and Lou was able to play.[5] Lou was a heavy hitter as well as a pitcher for the team.[5]

All throughout his teens and young adulthood, Lou worked part-time jobs alongside his mother to help support the family.[5]

Not long after a standout performance on the mound for the Columbia baseball team, Lou was approached by a Yankee's recruiter, and soon signed on as part of the team.[5] With a brief stint on the Senators again in order to learn a bit more about playing professionally, Lou was soon in place as the left-handed first baseman for the New York Yankees.[1][5] He played 17 seasons for them, 2,130 consecutive games, from 1923 through 1939.[8][9] Lou was renowned for his prowess as a hitter and for his durability, a trait that earned him his nickname "The Iron Horse".[1] He was an All-Star seven consecutive times, a Triple Crown winner once, an American League (AL) Most Valuable Player twice, and a member of six World Series champion teams.[8][9]

Lou had a career .340 batting average, .632 slugging average, and a .447 on base average.[8] He hit 493 home runs and had 1,995 runs batted in (RBI).[8] In 1939, he was elected to the Baseball Hall of Fame and was the first MLB player to have his uniform number, 4, one after Babe Ruth's number 3, retired by a team.[8][9] Lou was often overshadowed by Ruth due to his quiet demeanor, in opposition to Ruth's flamboyant way.[9] Lou removed himself from the Yankees lineup May 2, 1939 as his then mysterious illness, later known as Lou Gehrig's disease, left him unable to play up to the standards he and his teammates were used to.[9] He served as the Yankee's captain from 1935 until his death in 1941.[9][5] His wife Eleanor was pushing him to see doctors as it became clear something more than aging out was happening.[5] His doctors included a team headed by Charles Mayo of the Mayo Clinic himself.[5] It was that team that was finally able to diagnose him with amyotrophic lateral sclerosis (ALS)[5]

Lou Gehrig died June 2, 1941 at his home in Bronx, New York.[2][3][5] Babe Ruth and his wife stopped by to console Eleanor when they heard the news.[5] Flags across the city were flown at half-mast.[5] Lou's remains were cremated and interred at Kensico Cemetery.[5][3][10] Several other Yankees from the same club were buried in the same cemetery or the one next door.[5]

Lou was voted the Greatest Baseman of All Time by the Baseball Writers Association of America.[9] He was honored with his face on a postage stamp in 1989.[9] In 1999, he was voted onto MLB's All Century Team.[9]

Is Lou your ancestor? Please don't go away!

ask our community of genealogists a question.
Sponsored Search by Ancestry.com
DNA
No known carriers of Lou's ancestors' DNA have taken a DNA test.

Images: 4
Lou Gehrig when he was introduced as a new player of the New York Yankees 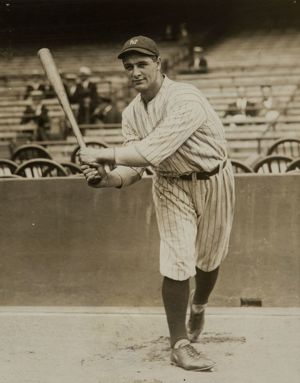 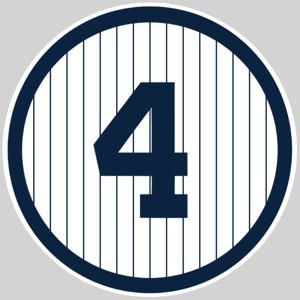 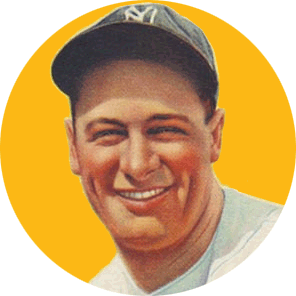 Ray Jones
Lou Gherig was a pitcher when he played baseball at Columbia University. He was an amazing athlete, and in college played several sports and played multiple positions in college baseball, including pitcher:

Deb Roberts
Did Lou pitch as well? That's the impression given by saying "performance on the mound". Mound usually refers to the pitcher's mound.
posted Jun 19, 2019 by Deb Roberts

We plan on featuring Lou as our example profile of the week June 19th. Please feel free to do any "sprucing" of the profile between now and then. Otherwise, I'll be doing some updating once we're closer to the 19th.

Lisa (Kelsey) Murphy
He had muscle spasms and broken bones even the occasional sickness and still played in 2,130 consecutive games. 13 seasons worth of playing brought 100 runs and 100 RBI. His average of .361 in 7 world series got the Yankees 6 titles. He felt like missing a game would be letting everyone down so he did not miss a game. He was called the Iron Horse. He is quoted as saying "I consider myself the luckiest man on the face of the Earth. And I might have been given a bad break, but I've got an awful lot to live for."

Lou is 25 degrees from Mary McCauley, 30 degrees from B. W. J. Molier and 21 degrees from Henry VIII of England on our single family tree. Login to find your connection.