He married Katie Ivy Moore on 9 May 1917 in Nowra, New South Wales, Australia [2] and they were the parents of Mabel Ivy (Geoghegan) Morgan.

Victor died on 5 August 1965 in Nowra, New South Wales, Australia [3]. He was cremated elsewhere and his remains were intered in the Wall of Memories at the Nowra General Cemetery, [4]. 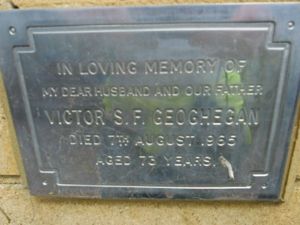