From records of John Gerwitz:

Simon Gerwitz was the oldest son of Reimond ( another form of his name) Gerwitz and Theresia Weber. He was born in the town of Onsbach Achern in the state of Baden. Germany on February 7, 1842.

When Simon was about twenty years old he left Germany with his brothers Anton and Andreas. Simon and Anton traveled to St. Louis where they were settled by 1868. Andreas went to England with his wife, but he later emigrated to St. Louis.

… Simon married Elizabeth Reck circa l867-guessing from the date of birth of their first child. Their wedding record has not been found in St. Louis-perhaps they married in Germany. Elizabeth was born in Baden, the daughter of Joseph Reck and Francisca Schoenen of Baden, Germany.

… The family lived at 1128 North Ninth Street in the early 1870's. They moved to 822 Biddle Street in 1872 and stayed there until the late 1890's. By 1900 Simon lived at 1823 North Eighteenth Street where he lived until his death thirteen years later. Simonworkedasashoemaker. After twenty years in the US, he became a naturalized citizen in 1888. After forty-five years of marriage, he died of heart failure on January 7, 1913 a month before his seventy-first birthday. He was buried in Calvary Cemetery in St.Louis. For nine years, Elizabeth stayed in the house on Eighteenth Street with her daughter Louisa until her death on January 16, 1922 from bronchial pneumonia. She was almost seventy-nine years old. She is buried next to Simon. </blockquote>

Thank you to Sharon Atkins for creating Gorrwitz-34 on 3 Aug 13. Click the Changes tab for the details on contributions by Sharon and others.

ask our community of genealogists a question.
Sponsored Search by Ancestry.com
DNA Connections
It may be possible to confirm family relationships with Simon by comparing test results with other carriers of his Y-chromosome or his mother's mitochondrial DNA. However, there are no known yDNA or mtDNA test-takers in his direct paternal or maternal line. It is likely that these autosomal DNA test-takers will share some percentage of DNA with Simon: 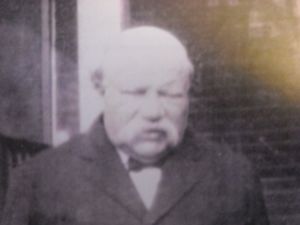 Hans Gerwitz
Simon is said to have immigrated to the US in 1867, just after marrying Elizabeth Reck. I have personally visited the grave in Calvary Cemetery of St. Louis City, Missouri, where Simon and Elizabeth are buried as "Gerwitz".
posted Aug 17, 2015 by Hans Gerwitz