Pope Saint Pius V (17 January 1504 – 1 May 1572), born Antonio Ghislieri (from 1518 called Michele Ghislieri, O.P.), was Pope from 8 January 1566 to his death in 1572. He is venerated as a saint of the Roman Catholic Church. He is chiefly notable for his role in the Council of Trent, the Counter-Reformation, and the standardization of the Roman rite within the Latin Church. He excommunicated Elizabeth I of England for heresy and persecution of English Catholics during her reign, and arranged the formation of the Holy League.

Antonio Ghislieri was born in Bosco in the Duchy of Milan (now Bosco Marengo in the province of Alessandria, Piedmont), Italy. On 8 January 1566, Ghislieri was elected to the papal throne as Pope Pius V. He was crowned ten days later, on his 62nd birthday by the protodeacon. Pius V died on 1 May 1572 of what is believed to be cancer. He was buried in the chapel of S. Andrea which was close to the tomb of Pope Pius III, in the Vatican. The pope's body was placed in the Sistine Chapel of the Basilica di Santa Maria Maggiore in 1698. Pope Pius V was beatified by Pope Clement X in 1672, and was later canonized by Pope Clement XI (1700–21) on 22 May 1712. His feast day is April 30.

ask our community of genealogists a question.
Sponsored Search by Ancestry.com
DNA
No known carriers of Antonio's ancestors' DNA have taken a DNA test. 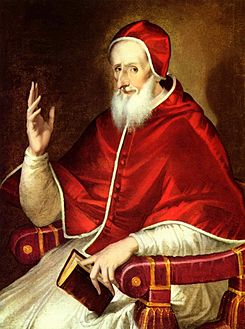