This profile concentrates on the 'lighter', spiritual side of this amazing 'human being', the development of his 'beingness'. Sananda Lal Ghosh's 1980 biography has much on the 'darker', human side, with further aspects in the profile of "Mejda"'s friend and assistant Basu Kumar Bagchi, who also became a Swami but renounced it, when they parted company.

Mukunda Lal Ghosh was born on 5 January 1893 the son of Bhagabati Charan Ghosh and Gyana Prabha Ghosh (nee Bose) in his parents house on Police Officer Road, Gorakhpur in northeastern India near the Himalayan Mountains, where he lived for his first 8 years. Bhagabati and Gyana were Bengalis of the Kshatriya caste (2nd caste originally of rulers and warriors); both became disciples of Lahiri Mahasaya of Banaras.

In his 12th year, of 1905, after asking his father if he could take a trip to the spiritual capital of India, Benares (Banaras or Varanasi), having had some prior escapades without his permission, his father responded with a round trip pass from Bareilly to Banaras, some money and 2 letters, for a fellow disciple Swami Pranabananda, whom his father was already acquainted with through their work with Indian Railways and their Guru, Lahiri Mahasaya. It was through Mukunda's meeting with the fully enlightened Swami that he became aware of the Siddhis power of bilocation, being bodily in 2 places at the same time (Yogananda, 1946, Ch.3). Those 'prior escapades' demonstrated that he already had the faith that "whatever things you ask when you pray, believe that you receive them, and you will have them" (Mark 11:24). He knew that "faith is the substance of things hoped for, the evidence of things not seen" (Hebrews 11:1).

It was through his meeting with Mahendranath Gupta (14 July 1854 – 4 June 1932), one of Ramakrishna's disciples, whom Paramahansa Yogananda referred to respectfully as 'Master Mahasaya', and not to be confused with Lahiri Mahasaya his parents Guru that he had his first experience of Cosmic Consciousness (Yogananda, 1946, Ch.9, pp.94-95)[1]. Many have written and theorised about it but experiences are harder to find (Yogananda, 1946, Ch.14, pp.166-168[2], Ch.22, pp.242-244). Many years later he would write a poem about it and his Guru, Sri Yukteswar Giri, would teach him to summon the blessed experience at will, and transmit it to others (op.cit., pp.170-171). American poet Walt Whitman's wakefulness was similar to the Orientals but spontaneous, not generated by spiritual practice[3].

In 1915 Mukunda Lal Ghosh's name was changed to Yogananda when he entered the ancient monastic Swami Order - confirmation of his Self-realization, by his Guru Swami Sri Yukteswar, and aged about 22 years. It was the same year, in June 1915, that he received his Degree (A.B.) at Calcutta University, having begun his 'course' at Scottish Church College in the 3rd quarter of 1910 (Ghosh, 1980, p.154). He is #40 on a Kriya network or 'family' tree of 73 members commencing with Mahamuni Babaji, and one of 31 disciples of Sri Yukteswar[4].

In 1917, he began his life's work with the founding of the Yogoda Satsanga Society school in India. It was the sacred mission entrusted to him by Mahavatar Babaji and Swami Sri Yukteswar: the worldwide dissemination of India’s ancient Kriya Yoga[5] science of spirituality for the upliftment of all humanity. The school began with "seven children at Dihika, a small country site in Bengal, India. A year later in 1918, Sir Manindra Chandra Nundy funded the school, and it was moved to Ranchi, India. Yogananda called the school Brahmacharya Vidyalaya."[6]. When he went to America it would be the self-sacrificing Satyananda Giri (#30) who would save the school when there were difficult financial situations both at home, and for Yogananda in the U.S.A. (op.cit.).

In August 1920 Yogananda sailed on the ship "The City of Sparta" for America for the first time, arriving at Boston, Massachusetts, U.S.A on 19 September 1920 as the Indian representative at the International Congress, where he gave a speech on 6 October. He spent 3 years in Boston, staying with Dr M W Lewis, who became the first American Kriyaban[7], before starting on a tour of the country giving many lectures, establishing an American Headquarters on Mount Washington Estate, in Los Angeles, California in 1925. He spent all the 1920's lecturing and giving Yoga classes all over the U.S.A., the principal mission for his being in America, and became the first Swami to be officially received by the President. After Boston, he went to Philadelphia for the first time in 1924, where " the Father of Yoga in the West"[8], ... "gave a month-long series of lectures and classes at the Philadelphia Public Library which were so popular that hundreds of people had to be turned away" (op.cit.) and one of the students was Leopold Stokowski, who was to say "Music is vibration, and all life is vibration. Yogananda has profound knowledge of this, and of concentration and of charging the body with vitality. I have learned much from him" (Yogoda booklet, 1924). Philip Goldberg (2018) gives some interesting insights into aspects of the rest of this tour.

The principal vehicle for this mission was to be the Self-Realization Fellowship Lessons, which give his in-depth instruction in the actual techniques of the highest yoga science of God-realization, and were originally created in the 1930s.

In March 1935 he had the Self-Realization Fellowship chartered under the laws of the State of California and sailed from New York on the ship "Europa" on 9 June 1935 with his Secretary Mr C Richard Wright for England. Later in the year, after visiting Europe, Israel and Egypt, he returned to India on the ship "Rajputana" arriving in Bombay on 22 August 1935, and during his stay, his guru, Sri Yukteswar Giri, bestowed on him the further religious title of Paramahansa, before his guru made his transition in March 1936. Whilst in India in 1935, Yogananda gave Rabindranath Bhattacharya his 2nd Kriya after witnessing Yoganandaji’s samadhi[9], which would lead to a very important development in the global expansion of Kriya Yoga (see below).

After a 2 hour session with his guru in June 1936, Sri Yuteswar's last words were "whenever you enter the door of nirbikalpa samadhi and call on me, I shall come to you in flesh and blood, even as today" (Autobiography of a Yogi, p495). Steve Taylor equates this with the fully awakened state when "the world of form disappears all together. It dissolves into an ocean of pure spirit, which one feels is the ultimate reality of the universe .... with no concept of self"[10]. Russell Williams and Eckhart Tolle refer to it as 'Universal Consciousness', and Sri Krishnamurti Krishnamurti as the 'otherness'.

On 23 October 1936 Swami Paramahansa Yogananda arrived back at New York on the ship "Bremen" from Southampton, England, giving his age as 42 on the typed passenger list and name Yogananda Swami G. (for Giri) and handwritten below "alias Mukunda Lal Ghosh".

In 1942 he signed a U.S. WWII Draft Registration Card when he was 49 giving his employment as President, Self-Realization Foundation; residence as Golden Lotus Temple, Encinitas, San Diego, California, and signed it Swami Yogananda. His naturalization declaration was made on 11 October 1946 at Los Angeles and was received on 26 August 1949 when he was aged 56 in California.

He assigned a project to update the all important Self-Realization Fellowship Lessons to Sri Mrinalini Mata telling her, “The Lessons will be your life’s work”.

Yogananda left his body on 7 March 1952 in Los Angeles, California after giving a speech at a banquet in honour of the visiting Ambassador of India, as he had predicted. Followers say that he entered mahasamadhi - [final earth exit of a great Yogi]. The official cause of death was heart failure (see Wikipedia ref.). He was buried at Glendale, Los Angeles County, California, USA.

In 1977, the 25th anniversary of the passing of Paramahansa Yogananda, the Government of India issued a commemorative postage stamp in his honour (Yogananda, 1946, p.571).

For a comprehensive bibliography of Paramahansa's published works see the Wikipedia reference in the Sources.

It seems entirely appropriate at the end of the centenary year of the start of Yogananda's mission to America to remind ourselves "that healing for the discord on this earth cannot be found in outer solutions alone, but only by our inner attunement with God" (Brother Chidananda, President, SRF, New Year 2021).

Is Mukunda your ancestor? Please don't go away!

ask our community of genealogists a question.
Sponsored Search by Ancestry.com
DNA
No known carriers of Mukunda's ancestors' DNA have taken a DNA test. 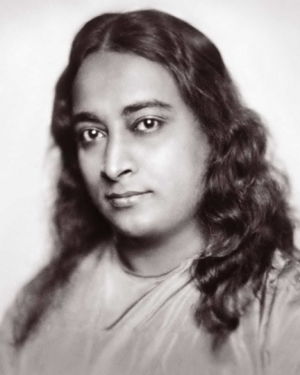 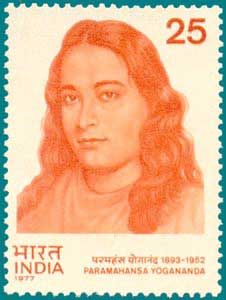