Father of Gabriel Gibault
Died before Jul 1667 in Poitou, France

Pierre Gibault and his wife Renée are named as parents on their son Gabriel's marriage record in New France. They are also named on the marriage record of their son Pierre in July of the same year (1667) at Poitiers in France; Pierre is deceased, but Renée was present for the occasion. Also present for the younger Pierre’s marriage was his brother Jacques who was himself married some ten years earlier also at the Saint-Porchaire parish of Poitiers. Present at his marriage was Pierre Gibault, though it is not indicated if this was his father or brother, it would most probably have been his father rather than his teen-aged brother.

The couple's known children were:

Two of the sons Gabriel and Jacques claimed Lusignan as their birthplace, which would suggest the family was living there for an extended period of time in the 1630-40's. They seem to have relocated to Poitiers before 1656. No record for Pierre's death has been located. His widow Renée died at Poitiers 2 September 1674.[2] 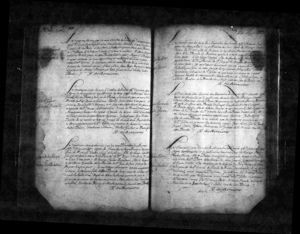