Edward Gilkey was born on 19 February 1839 in Greenup County, Kentucky the son of William Gilkey and Harriet Blankenship[1][2] He was named for his grandfather and the family patriarch Edward Gilkey who adopted the use of the spelling Guilkey for the family name. Many descendants continued using the Guilkey spelling variation although in the twentieth century the family returned to the original Gilkey spelling.

Young Edward grew up in Greenup County and was living there in 1850 with his father and mother, William Gilkey and Harriet Blankenship. Between 1850 and 1860 Edward's mother died and he went to Indiana with his older brother Elinzey. They stayed with their uncle, John Gilkey, who owned a farm in Hamilton County, Indiana near the town of Noblesville. [3]

In April 1861, the Civil War began when Confederate forces fired on Fort Sumpter. Noblesville, Indiana and the surrounding area were caught up in a patriotic fervor to save the Union. When President Abraham Lincoln called for 75,000 volunteers to form an army to put down the rebellion men from Noblesville and Hamilton County were among the first in Indiana to answer the call. These volunteers were originally called the "Hamilton Continentals" but later became the Sixth Regiment, Indiana Volunteers.

Edward Gilkey enlisted for a term of three months as a Private in Company I, 6th Regiment Indiana Volunteers on 20 April 1860 at Noblesville, Indiana. Military records give his physical description as: 5 ft 8 in tall, light complexion, sandy hair and grey eyes. He was 22 years old.

After his three month term was up in July 1861 Edward returned to Noblesville, Indiana and after a brief visit re-enlisted as a Corporal in the 39th Indiana Regiment for a three year term. He was first sent to Kentucky where he became ill and was hospitalized in Louisville in January and February 1862. When he was returned to the regiment he was detached to act as Assistant Wagonmaster for the Division and served in that capacity for most of the rest of his war service. His brother, Solomon Gilkey, was a Division Wagonmaster and they served together. He was at the Battle of Shiloh, 7 April 1862 as well as numerous other engagements including the Battle of Chickamauga in September 1863. He was mustered out of the service at Atlanta, Georgia on 23 September 1864. [4]

After the war he returned to Kentucky where he married Elizabeth Johnson Sinnett, the daughter of John and Sabilla Sennet, on 13 Feb 1865 in Boyd County, Kentucky. The bond dated 12/13/1865, was signed by Edward Guilkey and C.S. Guilkey. She was born 1841 in Ohio and was the widow of Samuel Boyles. The marriage took place at the home of C.S. Guilkey in Catlettsburg, Kentucky. William Hampton performed the marriage ceremony. [5]

Edward worked as a teamster and moved his family every few years between Boyd County, Kentucky; Ironton, Ohio; and Portsmouth, Ohio. In the 1880 census Edward and Elizabeth along with their children resided in Ashland, Kentucky with his sister Grace. [6] In 1900 he was working as a teamster for a wagonmaster in Portsmouth, Ohio.

A newspaper item in 1896 with the headline,Old Soldier Robbed, provides a little insight into Edward Gilkey's life.

Greenup, KY. Sept 16. "Ned Guilkey, an old soldier, was robbed while intoxicated of $19 and a pair of gold spectacles. He did not discover his loss until Tuesday morning, and claims the deed was done while he was asleep. Guilkey makes his home at the military home at Dayton, O., and is here on a visit." [7]

Poor health and old age continued his decline leaving him in the deplorable condition of serving a term as a Prisoner in the the jail at Portsmouth, Ohio in 1900. [8]

He applied for a military pension based on disability in June 1885 and eventually received $10.00 a month. [9] In 1904, he was in the National Military Home in Dayton, Ohio and there died 25 September 1906. [10] His occupation was listed as Teamster. [11] [12] His widow Elizabeth Gilkey received a widow's pension for his military service until her death in 1914 in Columbus, Ohio.

ask our community of genealogists a question.
Sponsored Search by Ancestry.com
DNA Connections
It may be possible to confirm family relationships with Edward by comparing test results with other carriers of his Y-chromosome or his mother's mitochondrial DNA. However, there are no known yDNA or mtDNA test-takers in his direct paternal or maternal line. It is likely that these autosomal DNA test-takers will share DNA with Edward: 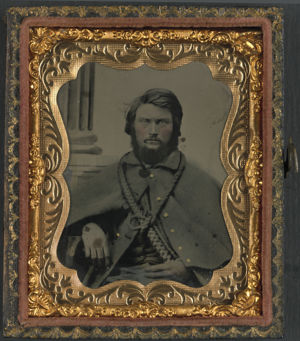 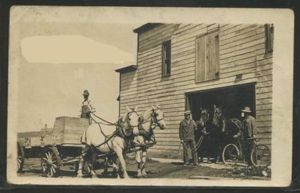 Typical garb of a teamster 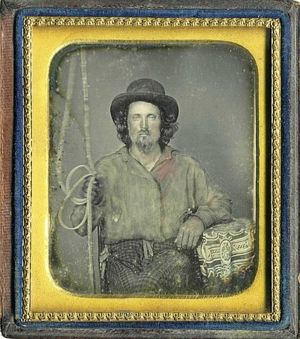 Edward is 19 degrees from Katie Goodwin, 18 degrees from Wilbur Scoville and 17 degrees from Henry VIII of England on our single family tree. Login to find your connection.