Michael was born in 1854 in Callicoon, New York.

Passed in 1936 in Illinois, while living in Belmont, DuPage, Illinois. but buried in St. Annes Cemetery, Hornell, Stuben, New York.

Worked as a pipe fitter, and with a rail road.

This I must admit is a little sketchy but the dots seem to connect him to the small Starrucca township. His father is buried Starrucca. His mother died in Sturrucca, and he is listed as a resident of Starruccca in her 1897 Obituary. So I am just putting here as to not lose it. Or this could mean his parents are improperly listed and he is different Micheal Gilleran.

They have two children, Mary (2 and perhaps Mame though birthday on her page would be wrong, but there was already confusion about it) and Margret (1).

Also telling is that lived next to Michael Earls, age 34 and his family including his brother Patrick, age 22. Both are blacksmiths. Earle, Mary's maiden name. And this census shows all being born in Ireland.

Of the 500 to 600 people listed on this census of Starrucca Township, there are no other Earls or Gillerens or a variation. 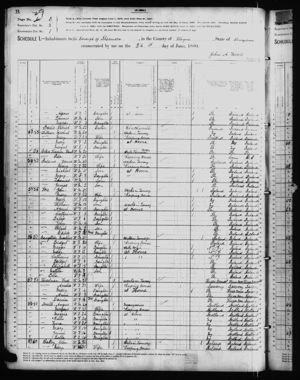