The following is excerpted from a PDF downloaded from Ancestry.com titled "Edward Gilman Jr Begat..." presumably the original source is the book of the same name by Nadine (Gilman) Scott

Edward Gilman, the Emigrant, son of Edward Gilman of Hingham, was born in 1585 and baptized in April 20, 1587 in Hingham, Norfolk, England. His birth year was established per a deposition he made in 1637 at the age of 52 in which he also states his father's name was Edward.

He immigrated with his wife and children in 1638 with the Rev. Robert Peck group. Rev. Peck had been Rector of the Parish in Hingham since 1605. He was prosecuted by Bishop Wren for his opposition to practices of England's "established church". He and 133 of his followers left Gravesend, England on 26 April 1638 on the ship "Diligent" of Ipswich, England, John Martin, Master. They arrived in Boston on 10 August 1638. Edward Gilman was registered as arriving with his wife, three sons, two daughters and three servants. A third daughter was on the same ship with her husband and two servants. It is said Edward sold his "considerable property in Hingham, England for half the value".

Edward, the Emigrant, died between 15 January and 10 April 1655. The date of administration of his estate granted to his widow, Mary, was 10 April 1655 in Exeter, Rockingham County, New Hampshire (State Papers Vol. XXXI.

Mary was ordered by the county court to produce consent of her children to the disposal of the estate according to a deed of the deceased. Those consenting were Moses Gilman, John Gilman, and John Folsom, Daniel Cushing and John Leavitt (sons-in-law).

On 14 January 1655, Edward had deeded his entire estate to his wife, his two surviving sons, John and Moses, and to his sons--in—1aw. Inventory of the estate was attested to on 2 August 1655, the amount being §2l1.0.0. Edward and Mary's third son, Edward Jr had preceded him in death in 1653. It is said he was so distraught over Edward Jr's death at sea that his health deteriorated to the point of causing his own death.

Edward (Sr) was admitted a freeman in Hingham, Mass. on 13 December 1638, per some historians. Others give the date of 13 March 1638/9. At any rate, in 1639 he was deeded land in Hingham by his brother-in-law Nicholas JACOB and then in 1641, he and others received a land grant of 8 miles square from the Plymouth Colony at Rehoboth (then Seekonk) Massachusetts. In 1643 his property was valued at §3OO (300 pounds). He is not shown on the town records after 1646 but does appear on records in Ipswich, Mass. in 1647.

Another reference notes he is living in Hingham, Mass. on 20 October 1647. On 18 September 1648, he bought his son Edward Jr's farm in Ipswich, Mass., which he later sold to Richard SMITH Jr in 1651. He sold other Ipswich property to his son, John on 10 December, 1650. By 1650 he had also sold his land in Rehoboth to Joseph Peck Jr. On 10 May 1652 he and his son, Moses, were accepted as citizens of Exeter. N.H. On 8 May 1652 he bought land at the Lanprey River from Thomas Biggs, and on 8 July 1652 he, along with sons John and Moses and son-in-law John LEAVIIT, was granted 200 acres in Exeter "about 2~3 miles from town". Also, this same year on 1 October he sold his land in Hingham, Massachusetts. A deed with John Tedd on 14 January 1654/5 is registered in Exeter, witness Mary Petit. Mr. Tedd also witnessed a Gilman family deed in 1653. On 8 October 1653 Edward Sr. sold his home lots "formerly belonging to John Cram and Thomas Petit."

In the appendix to Wayne Clark Gilman's "The Founding Fathers of ‘Old Colony’ N.H.", several land deeds are listed for Edward Sr. and his sons, Edward Jr, John and Moses.

The moniker, "The Emigrant" seems to be an invention of Constance Le Neve Gilman Ames even though all major sources acknowledge Edward as the father of much of the American branch of the family. Edward came to America on the Diligent out of Ipswich, England in 1638.

There has been confusion over the identity of Edward's father. Arthur Gilman and A. W. Gillman, working from the papers of Samuel Heyhoe Le Neve Gilman, claim that Robert was the father.

Ames cites genealogist Charles E. Banks, who claimed to have uncovered a 1637 deposition by Edward stating that his father was also named Edward.

Note: John & Moses Gillman To Joseph Peck
"Wee John and Moses Gillman of Exeter in New England .... wheras in the life time of our now Deceased father Edward Gillman there was by him sold a pcell of land in Seaconke to our kinsman Joseph Pecke there now resideing, and wheres a Deed of sale Authenticke was not by our said father given unto the said Joseph .... Wee therfore the said John and Moses Gillman" confirmed the sale by their father "unto our said Cozen Josepth Pecke".

The deed was dated at Exeter, 8 January, 1663, and signed by John Gillman and Moses Gillman. The witnesses were Humphrey Wilson and Richard Croade.

"Another writing .... agreeable to the forgoeing Deed" "I Mary Gillman late wife unto Edward Gillman senir: now Deceased .... know that my husband in his life time sould unto Josepth Pecke Junr: all his lands lying in Seaconke .... further I know my husband in his life time received satisfaction in pte for the aforsaid lands; and alsoe I Doe acknowlidge .... that since the Death of my husband I have received the remainder of the pay in full satisfaction for the land" The deed was dated 7 March, 1663, and signed by a mark.

The witnesses were John Leavitt and Japheth Hubbard.

From Colonial Families-- Came to Boston in the ship DILIGENT, 10 Aug 1638, with his wife and his son.

From Ancestral Records and Portraits -- The rector of the parish at Hingham, the Reverend Robert Peck, "a man of very violent schimatic spirit", having provoked his Bishop to prosecution, sailed from Gravesend, 26 April 1638, in the ship Diligent, with a party of one hundred and thirty-three persons, some of whom had sold their estates for half their value, and arrived at Boston, 10 August 1638. In the company were Edward Gilman, his wife, three sons, two daughters and three servants. They settled with their companions at Hingham, Massachusetts, and he was admitted Freeman there, 16 December 1638. In 1641 the Plymouth Colony granted him a tract of land eight miles square called "Seekonk", and he is later at Ipswich, and then at Exeter, New Hampshire, which became the family home for generations.[7]

THE FOLLOWING GENEALOGICAL SUMMARY IS EXCERPTED FROM:

The story of the Gilmans and a Gilman genealogy of the descendants of Edward Gilman of Hingham, England, 1550-1950.

2. John, was left a mansion and lands in Caston. No further record.

3. Edward (6), bapt. Apr. 20, 1557; wife's name not known. He was the father of Edward the Emigrant (7). instead of Robert, his brother, as stated in the records of Samuel Hayhoe Le Neve Gilman. The late Charles E. Banks, Genealogist, discovered a deposition made by Edward the Emigrant in 1637 at the age of 50, shortly before he left England, referring to his father as Edward. An incomplete list of children is furnished by Mr. Torrey, Genealogist.

4. Robert, bapt. 1559, buried March. 6, 1631, Caston; wife Mary . He inherited lands from his father. He has descendants in England and also in Canada, not to be confused with the Belgian Gilmans who have also settled in Canada.

6. Bridget, b. abt. 1582; m. Edward Lincoln and had Samuel and Thomas (the weaver) who emigrated to America with his aunt, Mrs. Mary Gilman Jacob (Mrs. Nicholas Jacob) in 1633 locating in Hingham, Mass.

NOTE. The "History of the Gillman or Gilman Family" by Alexander W. Gilman of London, England, gives many other pedigrees of the descendants of the first Edward Gilman and Rose Rysse who were married at Caston in 1550. 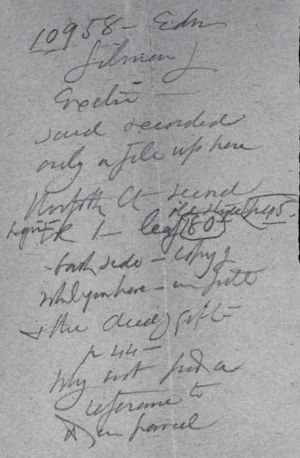 Cheryl (Aldrich) Skordahl
Profile needs clean-up. Looks like merges without proper biographical integration. Additionally sources not used for PGM profiles.
posted Mar 29, 2020 by Cheryl (Aldrich) Skordahl
BK McDonald
I will wait for the dust to clear, too. The idea is that there is known to be a Lawrence but none links to this profile?
posted Jan 19, 2015 by BK McDonald

Jillaine Smith
AnneB, please review the narrative. I think we were both editing at the same time and I may have accidentally deleted something you added. I caught one but there might be more. Sorry. I will step away now.
posted Jan 19, 2015 by Jillaine Smith

Anne B
There is no Lawrence Gilman on the list of this couple's children. He has no progeny listed here, perhaps he could be disconnected from these parents and merged into Gilman-93 (b.c.1561). Or does he belong with another family?
posted Jan 19, 2015 by Anne B
BK McDonald
Thanks for noticing this. Maybe Edward has been merged into obscurity.
posted Dec 02, 2014 by BK McDonald

Toby Rockwell
What has happened to this! I do not want to go crying malicious damage, but this does not make sense. I am not able to give this the attention it needs right now, but please--- someone give this some attention.
posted Dec 02, 2014 by Toby Rockwell

Vic Watt
Great! Do we know where that Sarah Ann belongs?
posted Oct 24, 2014 by Vic Watt

Anne B
There is a Sarah Ann connected as daughter who was born in 1685 after the death of this couple. Hearing no objection she will be disconnected.
posted Oct 24, 2014 by Anne B
Bob Tonsmeire
Based on the Genealogy section which I added to the text. I have reverted Edward the Emigrant to be the son of Edward II rather than of Robert, his brother. This data was sourced from "The story of the Gilmans and a Gilman genealogy of the descendants of Edward Gilman of Hingham, England, 1550-1950."

which was written in 1950 by Constance Le Neve Gilman Ames