The following is taken from the autobiography of Rev. Thomas Brush Brown. Link

"When my father came to Canada his family consisted of three children - two girls and a boy. My eldest sister Elizabeth became the wife of Reuben Gleason, who with his family came into Nissouri in 1828. Although in very moderate circumstances yet by industry and frugality they accumulated a large property in land and money. His life and character are well known to the inhabitants of East Nissouri. They have both passed away and left their wealth to their children." pg. 6

"The late Reuben Gleason, of E. Nissouri, and his father's family moved to New York State with our family and settled near Plattsburg, remaining in that part of the country during the war. He was in that notable battle fought in Plattsburg, where McDonald on the American side, fought his own cousin, McDonald, on the British side. For this service he drew land in Michigan some years ago. Only one of our neighbors was killed in the fight. It was while living here that Gleason married my eldest sister and here also my sister Mary was born." pg. 7

According to a post from the East Nissouri History Book group, there was a Brown Reunion in 1922. [The] Program of the Brown, Uren, Gleason, Vining Picnic, August 2nd, 1922, was held at Springbank, London, Ont. This was the 100th anniversary of the Brown's coming to Nissouri. Thomas Uren came in 1820, Rev. S. Vining in 1821 and Reuben Gleason in 1826.

According to information from the East Nissouri History Book Group: The first settlers at Medina according to the crown deeds were John Bessey (Beasley) and Gleason’s, Bessey coming from Niagara Falls in 1819 and the Gleason’s coming from Port Covington, New York in 1826. Reuben Gleason located on the south side of the present village. Joseph Gleason later occupied the Bessey farm and the community became known as Gleason's Corners. Reuben Gleason gave the land for the first school about 1846.

ask our community of genealogists a question.
Sponsored Search by Ancestry.com
DNA Connections
It may be possible to confirm family relationships with Reuben by comparing test results with other carriers of his Y-chromosome or his mother's mitochondrial DNA. However, there are no known yDNA or mtDNA test-takers in his direct paternal or maternal line. It is likely that these autosomal DNA test-takers will share some percentage (beta) of DNA with Reuben: 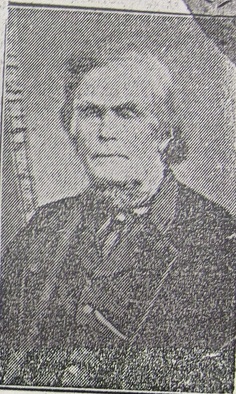