Gershom Goble's actual birthdate is unknown, but probably around 1733, based on the inscription on his headstone stating he was 75 at his death in 1808.

New Jersey, Abstract of Wills, 1670-1817 Volume XXXV, Abstracts of Wills. 1781-1785 1782, March 17. Goble, Robert, of Morristown, Morris Co.; will of. Wife, Mary, all my goods, and she is to be supported. Children, Gershom, Matthias, Jacob, and my grandson, Aaron Goble, and my daughters, Hannah, Abigail and Rachel, 10 shillings to each. Son, Jacob George f10. To Ruth, widow of my son Jonas, use of real and personal estate, with the above exceptions, and she is to bring up my grandchildren, and to give needed supplies to her mother-in-law. To Jered and Jacob, children of my son, Jonas, deceased, my real estate, with the above exceptions. If they die, then to Salome, Theodocia, Phebe and Anne. Daughters, Salome, Theodocia, Phebe and Anne, and my daughter-in-law, Ruth, personal estate. Executors – grandson, Stephen Fairchild, and my daughter-in-law, Ruth, his sister. Witnesses-Jonathan Stiles, Jacob Primrose, Timothy Johnes. Proved April 3, 1783. Lib. M, p. 189.

The following was taken from the Goble family website in September, 2013:

Goble Ancestors Some researchers believe that WILLIAM GOBLE and JOHN GOBLE were brothers. JOHN GOBLE was born 1536 in France and died 1609 in West Sussex, England. He apparently left France in 1560 to avoid religious persecution and settled in England. If WILLIAM and JOHN were really brothers and JOHN didn't leave France until 1560, then it's reasonable to assume that WILLIAM would have been born in France as well. Yet, all research I've seen points to WILLIAM being born in England. Was WILLIAM really born in England or was he born in France? Both WILLIAM'S and JOHN'S descendants are born in the same area in England, both have sons named William and John and both their descendants travel to the same area in Massachusetts about the same time. It does seem to point to the two being brothers. Does anyone have any evidence to back this up?

Generation No. 2 THOMAS GOBLE (WILLIAM GOBLE1) was born in 1589 (christened January 4, 1590) in Aldingbourne, West Sussex, England and died December 29, 1657 in Concord, Middlesex County, Massachusetts. He married 1) ALICE BROOKMAN, November 5, 1619 in Aldingbourne, West Sussex, England. She was born about 1600 in Sussex, England and died before 1628 in Concord, Middlesex County, Massachusetts. Notes for THOMAS GOBLE THOMAS imigrated to Massachusetts from England in 1634. As far as I know, Thomas Goble was the first Goble in this country (of my line of Goble's). He settled in Charlestown, Massachusetts in 1634 but moved to Concord at some point and that is where he died. There is some disagreement as to his wife's maiden name. I believe it was Alice Brookman; others believe it was Mousall. There is a marriage record showing Thomas Goble and Alice Brookman being married November 5, 1619 at Aldingbourne. There is also a baptismal record for Thomas dated 1590 that appears to show him to be the son of William Goble of Westergate. Assuming Thomas was a baby when he was baptized, that would have made him 29 at the time of his marriage and 67 when he died in 1657.

Is Gershom your ancestor? Please don't go away!

ask our community of genealogists a question.
Sponsored Search by Ancestry.com
DNA Connections
It may be possible to confirm family relationships with Gershom by comparing test results with other carriers of his Y-chromosome or his mother's mitochondrial DNA. However, there are no known yDNA or mtDNA test-takers in his direct paternal or maternal line. It is likely that these autosomal DNA test-takers will share some percentage of DNA with Gershom: 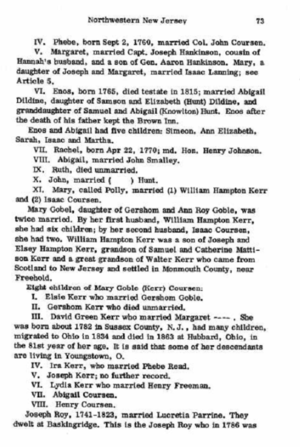