Francis Godolphin PC MP was a member of aristocracy in the British Isles.

Francis Godolphin was born in Whitehall on 3rd September 1678, the only child of Sidney, Earl Godolphin[1] and his wife, Margaret Blagge. [2][3] He was baptised at St Martin in the Fields on the following day. [2] His early education was conducted by the diarist, John Evelyn, before he went to Eton and King's College, Cambridge, [3] graduating MA in 1705. [1] He first entered Parliament together with his uncle, Charles Godolphin as MP for Helston in 1695, though he was not then of age. [4]

His marriage in 1698 by licence dated 23rd of April to Henrietta Churchill, daughter of John Churchill, Earl of Marlborough and his Countess, Sarah Jennings, brought Francis £10,000.[3] She bore him two sons and four daughters, [3] a son and a daughter dying young.

In 1701 at both elections held that year Francis was returned for East Looe with Sir Henry Seymour Bart[5] but on the second occassion he chose to sit for Helston with Sidney Godolphin. [4] The two Godolphins were returned together in 1702, 1705 and 1708 but in 1708 Francis chose to sit for Oxfordshire and was replaced by John Evelyn, [4] grandson of his old tutor. His father was created Earl Godolphin in 1706 and Francis adopted the courtesy title of Lord Rialton.

In 1710 Francis was returned to parliament for the last time as member for Tregony in company with John Trevanion.[6] His father-in-law by this time the Duke of Marlborough was dismissed from most of his posts in 1711 [7] but this does not appear to have adversely affected Francis. In September 1712 he succeeded his father as Earl Godolphin, and with the death of his father-in-law in 1722 he inherited his wife's share of the Marlborough fortune.

Francis had a keen interest in horses, keeping a stud at Babraham in Cambridgeshire and bought the stallion that came to be known as the Godolphin Arabian one of the forefathers of modern racehorses.[8]

His only surviving son, William, Marquess of Blandford died childless in 1731. [9] Henrietta died in 1733. 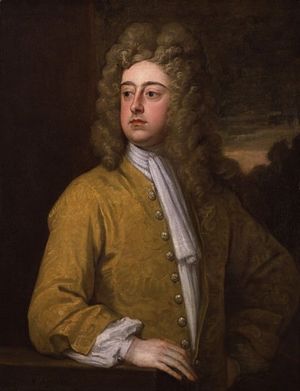