William Golding was a son of Alec Golding and Mildred Curnoe. He was born on 19 September 1911 at his grandmother's house in Newquay, Cornwall. [1] His birth was registered in St Columb registration district in the last quarter of the year. [2] [3]

In 1902 Golding's father, Alec, had become a science master at Marlborough Grammar School in Wiltshire, and the family lived in Marlborough at 29, The Green.[1] The 1911 Census records the family (consisting of father Alec, mother Mildred and older brother Joseph Thomas, along with a maid, Phoebe Sollis) living there, but at that point in 1911 William had not yet been born. [4]

Golding was educated at Marlborough Grammar School, where his father taught, and in 1930 went up to Brasenose College Oxford. For the first two years he studied Natural Sciences, but in 1932 he transferred to English Literature. He gained a good second class degree in 1935 and went on to study for a Diploma in Education.[1]

In 1939, having lived in London for a few years after graduation, Golding moved to Maidstone, Kent, where he took up a post teaching English and Music at the Boys' Grammar School. [5] It was in Maidstone that he met (Mabel) Ann Brookfield. The couple married on 30 September 1939.[6] They went on to have two children.

Shortly after his marriage, Golding took up a post at Bishop Wordsworth's School, Salisbury, teaching English and Philosophy. [7] [8] When the 1939 Register was taken, Golding and Ann (who was an analytical chemist) were living at 3 Rocky Hill Terrace, Maidstone, in what appears to be a small hotel or lodging house. Other residents included a prison chaplain, two arts and crafts teachers, an aircraft draftsman, a comptometer operator, and a solicitor's clerk. [9]

In 1940, after the outbreak of the Second World War, Golding joined the Royal Navy. He participated in secret research into explosives, but was injured in an accident and hospitalised. When he had recovered, he asked the admiralty 'to send me back to sea, for God's sake, where there's peace' [10]

He was later to serve in a destroyer which was involved in the pursuit and sinking of the German battleship Bismarck; and he also took part in the D-Day landings, commanding a landing ship that fired rockets onto the beaches. [1] [11]

After the war Golding returned to Bishop Wordsworth's School where he taught English and Religious Knowledge.[8] He wrote several novels during this time, all of which were rejected by publishers. His first published novel, the one for which he was to become so famous, was rejected by twenty-one publishers before it was accepted by Faber in 1954. Charles Monteith, a young editor, recognised the potential that others had missed. However, as editor, he suggested several substantial edits and toned down the novel's overtly religious aspects. He also didn't like the title - which was Strangers from Within. It was another Faber editor, Alan Pringle, who suggested Lord of the Flies. [1]

Lord of the Flies, which was well received by reviewers, made Golding famous and financially secure, going on to be used as a set text in schools and universities in the US and Europe, and translated into over 30 languages. Worldwide sales have been estimated at over 10,000,000. Over the next thirty years he was to continue as a successful writer, and his output included not only novels, but non-fiction and a play (see Published Works). He also wrote articles and reviews for magazines such as The Spectator, the Times Literary Supplement, and The Listener.[1]

Golding continued teaching at Bishop Wordsworth's School until 1962, [8] after which he made his living as a full-time writer.

In 1985 Golding and his wife Ann moved to Tullimaar House, in Perranarworthal, Cornwall, and lived there until his death in 1993. [1]

He was buried in Holy Trinity Churchyard, Bowerchalke, Wiltshire. When his wife, Ann, died two years later, she was interred in the same plot, under a huge yew tree. The memorial, quoting Shakespeare's Sonnet 116, reads: [14]

It is the star to every
wandering barque 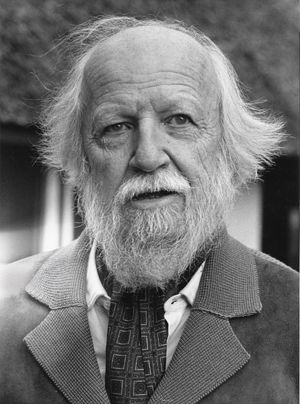 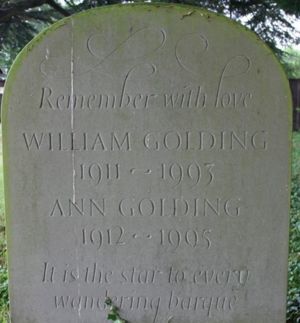 Opening page of Lord of the Flies 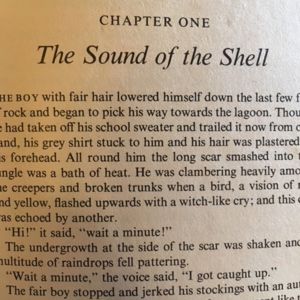