Marx Goldmark was born in Denmark

Karl Marx johan Goldmark was born on March 08, 1913 in Randers, Denmark. His parents were Johan Nielsen and Elisabeth Laursen. He married Edna Christiansen on November 09, 1938 Together they had 2 children:

My father Karl Marx Johan Goldmark, born on Randers 8 March 1913 change his name from Nielsen to Goldmark. It is in the church book.

He became a musician from his very early ages. And travel around Denmark and Sweden in a different band. And on Batory the ship that sails to island and USA.

Later my dad went to the university and became a teacher on business school.

Johan Goldmark father had his own bakery in Randers.

He meets a couple from Varde, on his trip to the USA, where he was entertaining on Batory ship. Where he entertained the guest, It was so strange because my dad told them, "my wife use to live in Varde". To make a long story short it was her uncle Sørens son Svend my mother use to live in the central hotel when she first came to Denmark. It was Sven, Sørens Christiansen son that took over the central hotel in Varde.

Under the war, money was not very big so he would take his harmonica and go around playing in the street. He has always been a survivor.

He was an amazing man and fun to be around. He always works very hard. Teacher during the day in business school, and play in his band in the evening. besides that, he made bongo drums and maracas my mother painted them. Both my parents was two active people my mother was a great painter as a hobby.

My dad as a very young boy, he was very fond of teddy bears.

My dad with the bird Klavs, it was a gorgeous bird so I was told. Every time my dad or my mum came out, the bird would fly to them expecting a treat.

Karl Marx Johan Goldmark ... He passed away on 22 November 1970 in Copenhagen
Marx was baptism on 20 July 1913 in st. Morten's church in Randers.
Confirmation on 24 april 1927 sct Peters Church Randers.
My dad play in a band Call fumlerød radio and another band. He later becomes a teacher. He was a wonderful person full of energy and fun to be around. In my very young days, I play in his band from I was 13 years old.

I like to share a lovely story, well went to an amusement park north for Copenhagen. It is actually in a forest, where we like to go and meet
Deer We were passing all the amusement park Bakken, and I know my dad use to entertain there with professor Tribini as he calls himself. Certainly, I saw this photo of my dad playing harmonica I could not believe he was hanging on the wall in and open space in and amusement park. I took a photo it was so unreal.

I play in my dad's band.

Is Marx your ancestor? Please don't go away!

ask our community of genealogists a question.
Sponsored Search by Ancestry.com
DNA
No known carriers of Marx's DNA have taken a DNA test. 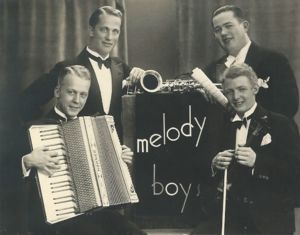 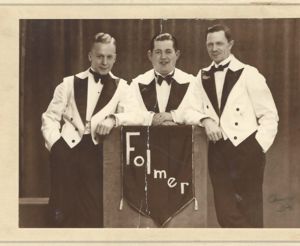 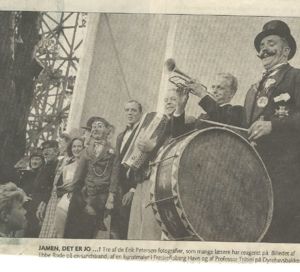 Marx Goldmark as a child 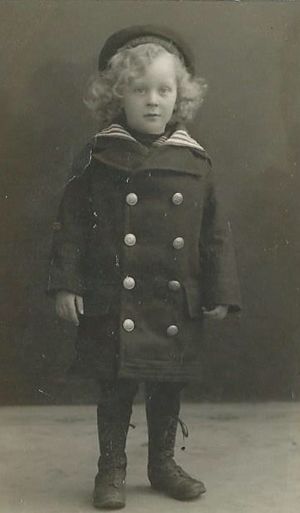 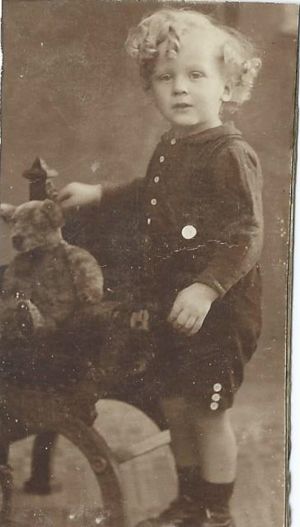 Pip Sheppard
I love these photos of your father, especially the one with the teddy bear.
posted Nov 17, 2018 by Pip Sheppard