Goldwater was born in Phoenix in what was then the Arizona Territory, the son of Baron M. Goldwater and his wife, [[Williams-38923|Hattie Josephine "JoJo" Williams]. His father's family had founded Goldwater's, a leading upscale department store in Phoenix. Goldwater's paternal grandfather, Michel Goldwasser, a Polish Jew, was born in 1821 in Konin, then part of Russian Empire, whence he emigrated to London following the Revolutions of 1848. Soon after arriving in London, he anglicized his name from Goldwasser to Goldwater. Michel married Sarah Nathan, a member of an English Jewish family, in the Great Synagogue of London.

His mother, who was Episcopalian, came from a New England family that included the theologian Roger Williams of Rhode Island. Goldwater's parents were married in an Episcopal church in Phoenix; for his entire life, Goldwater was an Episcopalian, though on rare occasions he referred to himself as Jewish.

In 1934, he married Margaret "Peggy" Johnson, daughter of a prominent industrialist from Muncie, Indiana. They had four children: Joanne (born January 18, 1936), Barry (born July 15, 1938), Michael (born March 15, 1940), and Peggy (born July 27, 1944). Goldwater became a widower in 1985, and in 1992 he married Susan Wechsler, a nurse 32 years his junior. Goldwater's son Barry Goldwater Jr. served as a United States House of Representatives member from California from 1969 to 1983. Goldwater's uncle Morris Goldwater (1852–1939) was an Arizona territorial and state legislator, mayor of Prescott, Arizona, and a businessman. Goldwater's grandson Ty Ross, a former Zoli model, is openly gay and HIV positive, and the one who inspired the elder Goldwater "to become an octogenarian proponent of gay civil rights".[1]

He belonged to both the York Rite and Scottish Rite of Freemasonry, and was awarded the 33rd degree in the Scottish Rite.

Goldwater was an avid amateur radio operator from the early 1920s onwards, with the call signs 6BPI, K3UIG and K7UGA.

In 1963, the senator was initiated as an honorary member of the Alpha Kappa Psi Professional Business Fraternity by the Beta Mu Chapter at George Washington University.

During the Vietnam War, he spent many hours giving servicemen overseas the ability to talk to their families at home over the Military Affiliate Radio System (MARS).

Is Barry your ancestor? Please don't go away!

ask our community of genealogists a question.
Sponsored Search by Ancestry.com
DNA Connections
It may be possible to confirm family relationships with Barry by comparing test results with other carriers of his ancestors' Y-chromosome or mitochondrial DNA. However, there are no known yDNA or mtDNA test-takers in his direct paternal or maternal line. It is likely that these autosomal DNA test-takers will share DNA with Barry: 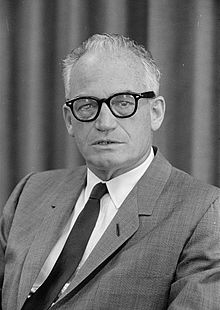