Daughter of [father unknown] and Nancy (Waneekchakawinkah) Brown
[sibling(s) unknown]
Wife of Charles Wąwąracąkega Blowsnake — married about 1868 (to about 1916) in Wisconsin, United States

The censuses give her Hocąk name as NauNaZoKaRiWinKah, a mistranscription of NauWaZoKaReWinKah, from ną, "tree, wood"; hawazók, "to be springy, spring-like; to bend by pulling, to bend by pushing (away from oneself), to bend something down or over; to push towards horizontal"; hare, "to swing"; -wį-, a feminine gender infix; -ga, a definite article suffix used in personal names. Her son Jasper's marriage record gives her name as Nowosogawinka, which is a phonetic variant of the same name, Nąwazógᵋwįga. The name means, "She (Swings) the Tree (Branch) by Bending it Over", akin to the well attested Thunderbird Clan name Nąnazógᵋwįga, "She who Bends the Tree Down". For Nąwazógᵋwįga, Lurie has "Bends the Boughs". (3, 113 nt 7) This name is more commonly a Bear Clan name referencing the practice of bears bending small trees or branches. However, this name also applies to large birds landing on springy tree branches. Since we know that Lucy was a member of the Eagle Clan (Lurie 5), it is this second image which the name references.

Her maiden name of "Goodvillage" was given in her daughter Stella's Social Security claim.

"Goodvillage" is not a particularly common name. We find in the 1880 census a large Goodvillage clan living around their matriarch Mary Decorah. The census organizes them thus:

Lucy may have been the daughter of Mary Decorah Goodvillage, but John, or some other unlisted member of this clan, could also have been her father. Mary's age is probably slightly exaggerated.

Some of Lucy's brothers who were living in Nebraska in the mid-1870s were mentioned by Mountain Wolf Woman (Lurie 2-3):

Lucy had the following children with Charles Blowsnake (Lurie):

The Lucy married to David Goodvillage is a different person: her birthdate is 1855, and her Hocąk name is given as NiAhTahKiWinKah which is for Nį-ątágᵋwįga, "Still Water Woman", a well attested Waterspirit Clan name. (1910 census, #467)

ask our community of genealogists a question.
Sponsored Search by Ancestry.com
DNA
No known carriers of Lucy's DNA have taken a DNA test. 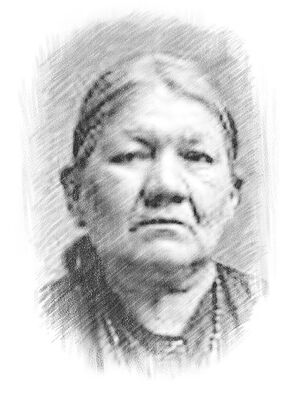