On April 30, 1943 Gaile was born in Brooklyn, NY as an unexpected surprise only child to overly doting parents Harry and Gladys Gordon.[1]

Her mother imprisoned her in frilly, ruffled, lacy dresses and entered her in contests, The result was the photo at left, showing her as the 1944 Gerber baby.

Her father pretended she was the son he had always wanted. The action packed life of a boy was much more fun. When she came in from play torn, filthy, and with skinned knees, her mother would exclaim "Oh my God!" in horror while her father would ask "Does the other one look worse than you?".

Gaile was born in the wrong place. Despite not having seen anything outside New York City, she always hated city life and wanted to live on a farm and have animals (probably like the ones in the zoo). She also grew up in the wrong era and continuously rebelled against the strongly enforced gender stereotypes of her generation. At a very early age, her career goal of becoming a pilot was established. It didn't matter that everyone told her "no, you don't want to be a pilot - you want to be a mommy". While other girls took Elizabeth Taylor as their role models, Gaile idolized Amelia Earhart.

She was an athlete when athletics were considered unfeminine. In high school, the only sport open to girls was swimming. Being small, a disadvantage for a swimmer, didn't impede her since very few girls were willing to get their hair wet.

She never could understand what liking math, science, mechanical stuff, and athletics had to do with femininity (or lack thereof) but she also enjoyed a few more socially correct things, like dressing up for the high school senior prom in 1959, illustrated at right.

In defiance of her parents' ultimatum to learn something useful in college (specifically home economics), Gaile and another young lady were the first two female undergraduates admitted to a small prestigious engineering college.

In 1962, four years post-Sputnik amid the national frenzy to catch up with the Russians, armed with a degree in Aerospace Engineering, Gaile set off to slay dragons. Alas - when she could not correctly answer the interview question "how many words a minute do you type?"[2] the dragons turned into windmills. She gave up tilting at them, admitted defeat, and did what the world wanted - she became somebody's wife and somebody's mommy.

She worked for government contractors, supporting U.S. military and intelligence agencies in a variety of engineering disciplines (mostly avionics systems, reliability, information systems, and just plain systems), first in NY and later in Virginia. The 1995 photo at left was her official company portrait, used on proposals.

Gaile officially retired in 2003, then worked as a consultant, where she could pick and choose exciting projects on which to work. She had the thrill of working on flight simulators and UAV's[3]

2007 was a year of three major life changes - Gaile officially retired (again), married George Connolly, and they moved to rural Alabama, where they found property that has a 100+ foot waterfall. She made a personal website (Piney Branch Falls) to serve as a journal so that all the widely scattered children and grandchildren can keep up with the events in their lives.

Retirement still doesn't work - Gaile just can't seem to learn to spell "rocking chair". She has an "accidental business" that started with people saying "now that you're retired and have time, could you ...." followed by things like "build or fix my computer" and "design a website for me". Nowadays, she mostly develops custom internet deployed turnkey information management systems (of which a website is a very small portion) for small businesses and non-profit organizations. Her business motto is: FAST - GOOD - CHEAP - choose any two!

A few years ago, Gaile's grandsons (now age 28, 26, and 21) asked for information about family history, so she built a website for their family tree and filled it with what she knew. When she discovered WikiTree, she was overjoyed with everything about it and realized what a feeble joke her previous attempt had been. The thrill of the global concept soon expanded to admiration of everything about the goals and implementation. She wanted to be part of it all to find and add information about her family, try to link to others, and also to volunteer to work on the tekky side.

Many wonderful WikiTree members, with voluminous knowledge of genealogy and great patience with Gaile's naiveté, generously educated her in how to research and properly document profiles as she "adopted" an abandoned gedcom with over 1,000 empty and unsourced profiles. As she learned, Gaile became addicted to WikiTree and gradually became more involved, joining the Profile Improvement Project, starting the Holocaust Project as its coordinator, becoming a Ranger, joining the Unknowns Project, and trying to reciprocate the genealogy training she received by responding to G2G requests for help with technical aspects of WikiTree, the internet, and computers. She developed a tool to convert a spreadsheet into a GEDcom file and a sample demo for a Ranger communication tool and also offered to organize the entire help labyrinth to make it possible to find things easily and explain them logically; but all her attempts to make technical contributions were met with lip-service encouragement, impediments during development, and rejection upon completion. One final episode proved to be the last straw, after which she withdrew from community participation, although she will still be happy to respond to any technical questions if you send her a private message.

I *STILL* WANNA BE A PILOT WHEN I GROW UP 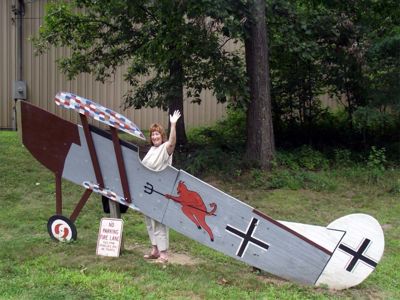 More sources - maybe even some real ones - might be added someday!

DNA Connections
It may be possible to confirm family relationships by comparing test results with Gaile or other carriers of her ancestors' mitochondrial DNA. It is likely that these autosomal DNA test-takers will share some percentage of DNA with Gaile:

Skye Sonczalla
Hello there! I'm rereviewing all the members who left a comment on the G2G about the Galicia Project. Please place the

Gaile (Gordon) Connolly is a member of the Galicia Project.
Member|Galicia (within double brackets) sticker on your profile to be grouped into a category of all Wikitree members researching in this region. Thanks!
posted Jul 04, 2022 by Skye Sonczalla

Hope your crisis is resolved in whatever is best for all -

Thank you for responding to my G2G post yesterday, it was good to know I wasn't the only one with the problem. I found what I think is the problem & posted the solution there. If you have time let me know if it works for you.

"I think I found the answer - apparently Edge turned on it's own enhanced editor. They don't make it easy to find! - go to the three dots in the upper right in Edge, click on Settings, type in 'enhanced' in the search space, turn off Microsoft editor. Seems to fix, thanks to everybody you were all more or less right."

Jori Lyon
Thank you very much for going over my Merritt Lyon profile! Your "fixes" look great and your advise will help me make all of my profiles look so much better! You are truly a Wonderful Wikitree helper!
posted Jul 29, 2021 by Jori Lyon
Patsy (Underwood) McKenzie
Thank you, Gaile! You helped me understand how the entries I have made on a tree are not "lost" with a merge. I imagine I'll still be asking questions years from now.
posted Apr 03, 2021 by Patsy (Underwood) McKenzie

Karen Lowe
I'd love to hear your thoughts on whether we should add categories for Wikipedians and Wikidata editors. Thanks!
posted Dec 17, 2020 by Karen Lowe

Because pre-1700 ancestors are usually shared by many descendants, collaborating with members of the projects which coordinate them is essential.

Use the Pre-1700 Projects list to find one which best fits your research focus, whether time period, location, or topic. Review the project pages to learn about resources and guidelines as well as how to collaborate with the project members.

Can't find what you're looking for? Let me know, and I can make some suggestions! :-)

P.S. If links do not work in an email from WikiTree, try them from the comment section on your profile page.

Melanie Paul
Pls don't yell at me for posting this .. or delete it cos ya duzzen like accolades!
posted Oct 25, 2019 by Melanie Paul

Pip Sheppard
Gaile, making more than one thousand contributions in September added so much to the breadth and depth of our Shared Tree. The Appreciation Team thanks YOU!

PS: You're a riot on G2G, even when asking a serious question, and I love it.

Pip Sheppard
Gaile, thank you for each of your more than 1000 contributions to our Shared Tree for the month of August 2019. All of your work makes our Tree all that much better.

PS: You're still a dragon slayer, and I love you for it.

posted Sep 16, 2019 by Pip Sheppard
Beulah (Maltby) Cramer
Do you have a list of the almost 1000 people who were living in the Ft. Oswego, New York, holocaust refugee camp. It was the only

US government sanctioned camp. The local paper just had an article on it and I wonder if it would help you in any of your profiles. Maybe I can find it ,if you don't have it but would like it.

posted Sep 14, 2019 by Beulah (Maltby) Cramer
W Robertson
I've been meaning to send this for some time. I appreciate the perspective you bring to WikiTree, especially regarding privacy. I am not nearly as careful as you, but am very happy a staunch privacy supporter is here. I also appreciate your willingness to explain code to everyone. You do it so clearly and so patiently. I understand it, but I lack the clarity in explanations and the patience to work with others. And I also appreciate your work on holocaust project, in my mind one of the more important projects on wikitree.
posted Aug 05, 2019 by W Robertson

Very well done on your making 1,000 or more contributions to WikiTree in June 2019! We commend and appreciate all of your time and effort in helping to grow and perfect our Shared Tree. Keep up the great work!

Chase Ashley
Quick update: My daughter read your bio and texted me, "Gaile sounds like a very cool woman." Based on your bio, I have to agree!
posted Apr 24, 2019 by Chase Ashley

I love your bio! I'm going to share it with one of my daughters who just graduated from the Grace Hopper Fullstack Academy.

Kathy (Stuewe) Zipperer
I just knew your comment about not understanding numbers was a little stultified. I love, love, love your bio!