From the Rochester Newspaper Monday, March 1, 1915

Samuel GORDON, 67, known to nearly everyone in the county as `Uncle Sammy` GORDON, died at the Woodlawn Hospital Sunday evening at two o`clock. Mr. Gordon had been at the hospital since last June. He has been ill for several years and since four years ago has been crippled on account of a weak limb. For 32 years Samuel Gordon and family lived on a farm in Liberty township south of the Rochester line. He was a progressive farmer and for years took an active interest in the democratic party of which he was a staunch supporter. He was born in Clinton county and 41 years ago he was married to Miss Diadema DEWEESE, in the Reed settlement near Fulton. They had six children, five of whom are living: Frank [GORDON], Eugene [GORDON], John [GORDON] and Lyman GORDON and Mrs. Harvey KIME. Mrs. Gordon is living. He leaves two sisters, Mrs. Martha HILL and Miss Hattie GORDON of Logansport. Mr. Gordon was a member of the Ben Hur and Maccabee lodges. The funeral will be held Wednesday afternoon at one o`clock at the house, Rev. A. S. WARRINER of the Methodist church in charge. 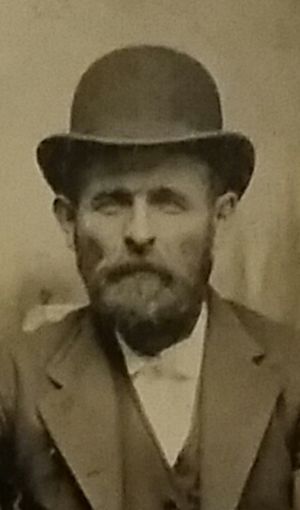