MR. T. P. GORMAN DEAD. A Prominent newspaper Man Mr. T. P. Gorman, Editor of the Free Press, passed away lait oiEht,at his home on Cooper street after several months' illness. Last February he was attacked by pneumonia which kept him confined to the house until April when he resumed his duties on the Free Press although he was far from well or robust. The pneumonia attack developed into bronchitis from which he suffered severely. Two weeks ago his illness developed serious symptom and he was obliged to give up work; Drs. lioger and Wright s medical attendants did everything possible but without avail. Deceased was married to Miss Mary McDonald a niece of Judge Reddin of Prince Edward Island who survives him together with a family of ' six small children. During the last days of his illness he suffered from choking sensations. He was devotedly attached to his family and general sympathy is felt at his death. Deceased who was 39 years of age was a native of Prince Edward Island. He was in every serine of the word a newspaper man, being brought up to the business. He served, his time at the case in the office of the weekly Era, Charlottetown and became an expert printer. He afterwards edited a Conservative weekly newspaper the Summerside Progress & came to Montreal about 1880 to fill a position on the editorial staff of the Herald. 1 During the session of 1882 he represented the Herald in the Press gallery of the House of Commons.! The following year he came to Ottawa as resident correspondent of the Globe, Toronto.- He filled that position until 18S7 when he replaced Mr. John T. Hawke as Editor of the Free Press. .: Until a few days ago, despite the fact that his life had been despaired of, he wrote j from his sick bed the articles which appeared daily in the Free Press and which dealt with the latest doings of the session. While thus engaged he talked cal nil-'about death and said that he was prepared to die. - Mr. Gorman was a vigorous writer and a hard-working journalist- He occasionally contributed articles to the magazines. A very able article from his pen on Louis Joseph Papineau who figured in the rebellion of 1887 appeared in the last issue of the Canadian Magazine. He also acted as Ottawa correspondent for a number of Canadian daily newspapers. A couple of years ago be was elected president of 'the Parliamentary Press gallery [1] 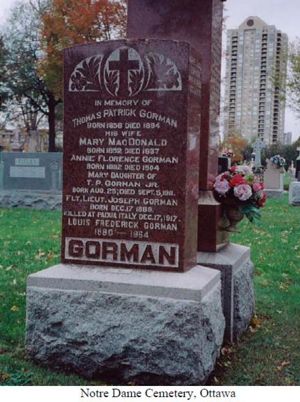