On Thursday, May 22, Mr. Reuben John Gosper, one of the oldest and most respected residents of the Manildra and Red Hill districts, passed away at his home Hornseywood, at the age of 87 years. As a young boy, Mr. Gosper came from Windsor with his parents, the late Mr. and Mrs. Richard Gosper, and a few years later selected the 'Hornseywood' property. In 1887 he married Edith Atkinson, who pre-deceased him just nine years ago. A family of two sons and two daughters remain to cherish his memory. Leonard, the eldest son, died, in France of wounds received at the first World War. Reuben, the youngest child, died when a baby. The surviving family is Sydney (Manildra), Annie (Mrs. J. Carey, Hornsby), Auben (Cowra), and Ethel (Hornseywood). For 12 years Mr. Gosper was a councillor of the Boree Shire. He was one of the foundation members of the Manildra P. and A. Association, of which he was a committeeman for over 40 years. He had always maintained a keen and active part in both public and church matters, and to everything for the good of humanity and the district he gave his utmost support. After a short service at the home on Tuesday conducted by Rev. Ritchie, the large and representative funeral cortege moved to the Meranburn Cemetery, where a guard of honor was formed, by members of the Manildra P. & A. Association and the Mandagery Masonic Lodge. Rev. Mullan assisted at the burial service. Funeral arrangements were in the hands of Mr. McKeowen.[1]

ask our community of genealogists a question.
Sponsored Search by Ancestry.com
DNA Connections
It may be possible to confirm family relationships with Reuben by comparing test results with other carriers of his Y-chromosome or his mother's mitochondrial DNA. However, there are no known yDNA or mtDNA test-takers in his direct paternal or maternal line. It is likely that these autosomal DNA test-takers will share some percentage of DNA with Reuben: 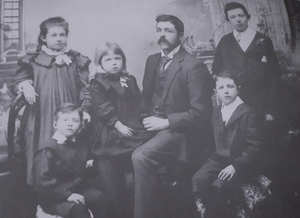