Mr. Ephraim Gosper, who died recently in Eugowra, was born at Windsor, in 1864. He left Windsor when a boy, and went with his father to Millthorpe, where his father took up farming, then later went to Meranburn, near Manildra. He married Miss Edith Douglas, of Coates Creek, who still survives him. Deceased came to Eugowra 41 years ago, and except for short stays in other parts lived at Eugowra for the greater portion of his life.

During the last 20 years he owned and raced many race horses, and scored many wins throughout the West and Central West.

He left a family of eleven children, of whom ten are living — four sons and six daughters, viz, David, who resides in England, R. J. Gosper (Eugowra), Albert (A.I.F.), Edward (Orange), and Mrs. P. Smeaton, Mrs. Jack Smeaton and Mrs. Jones (all of Sydney), Mrs. M. J. Croucher (Eugowra), Mrs. Gus Scarr and Mrs. T. Banham (both of Parkes). He is also survived by one brother and one sister, Mr. Reuben Gosper and Mrs. A. Atkinson, both of Manildra.

Ephraim was buried in Presbyterian Section of Eugowra Cemetery

Is Ephraim your ancestor? Please don't go away!

ask our community of genealogists a question.
Sponsored Search by Ancestry.com
DNA Connections
It may be possible to confirm family relationships with Ephraim by comparing test results with other carriers of his Y-chromosome or his mother's mitochondrial DNA. However, there are no known yDNA or mtDNA test-takers in his direct paternal or maternal line. It is likely that these autosomal DNA test-takers will share some percentage of DNA with Ephraim: 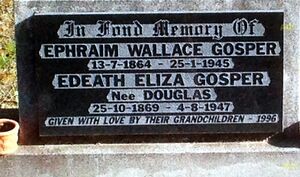 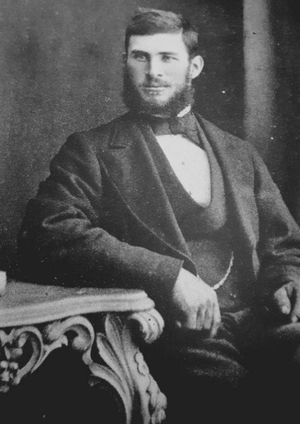